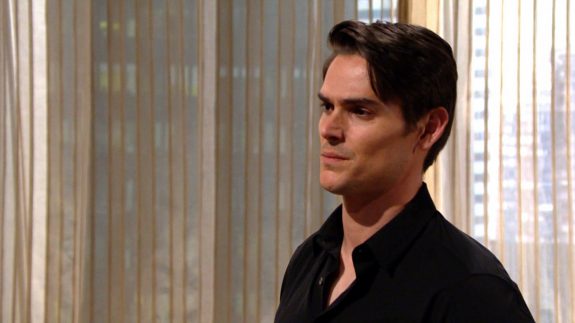 The Young and the Restless spoilers for Monday, November 18, tease that Kyle Abbott (Michael Mealor) will be upset over a unilateral decision that Billy Abbott (Jason Thompson) made regarding a boutique in Milan. He’ll point out that this is Ashely Abbott’s (Eileen Davidson) area, and that she’s not going to appreciate what he did. Kyle and Billy will argue fiercely about the decision, with the usual back-and-forth about Kyle not having earned his spot at the table. Kyle will ultimately leave.

Meanwhile, Chance Chancellor (Donny Boaz) will visit with Devon Hamilton (Bryton James) and Elena Dawson (Brytni Sarpy). He’ll apologize for being out of touch and explain that he was working undercover. He’ll explain that he never hired Amanda Sinclair (Mishael Morgan), and Devon will be upset that everything was a lie. Devon will tell Chance that he’ll figure this out on his own and that he doesn’t need his help.

Devon will then call Cane Ashby (Daniel Goddard), who will arrive later. Devon will offer Cane a chance to come clean before he hits him. Cane won’t appreciate the insinuation that he’s lying and will insist that the will pages are authentic. Cane will then get a call from Jill Abbott (Jess Walton), who will relay that she’s going to the Maldives to find Colin Atkinson (Tristan Rogers). Chance will book the next flight out, and Devon will be out for blood when it comes to Colin.

‘The Young and the Restless’ Spoilers: Chelsea Out Of Danger But Still Caught Between Two Loves

Next on Y&R, Chelsea Lawson (Melissa Claire Egan) will tell Chloe Mitchell (Elizabeth Hendrickson) that she feels guilty about Nick Newman (Joshua Morrow) dropping out of the race. Nick will eavesdrop as Chelsea says that Simon Black (Jeffrey Vincent Parise) could have dangerous friends and they could all be targets.

After Chloe leaves, Chelsea will tell Nick that Adam Newman (Mark Grossman) took Connor Newman (Judah Mackey) to a childhood trauma specialist. Nick and Chelsea will then go back and forth about whether they should bring Connor home to live there. Nick will once again be skeptical of Adam’s motives.

Next on Y&R, at Crimson Lights, Victoria Newman (Amelia Heinle) will gripe to Sharon Newman (Sharon Case) about Nick ending his political run and blame Chelsea. Billy will arrive, then Adam and Connor will arrive and invite Sharon to a play date, which she’ll agree to do. Afterwards, Victoria will note that Billy kept his cool around Adam, but Billy will worry that he’s transferring his anger onto Kyle.

And on the patio, Elena will chat with Nate Hastings (Sean Dominic) about Chance’s visit earlier. They’ll discuss Amanda, and Nate will defend her which will peeve Elena.

Next on Y&R, at Adam’s penthouse, Sharon will play with Connor and get him talking about the hostage standoff. After he’s upstairs, Sharon will note that Chelsea should be there, too. Adam will relay that Connor has stated that he wants his parents together, which Sharon will say represents stability to him. Adam will call Chelsea and suggest that she come spend time with him and Connor. She’ll agree.

Back at Nick’s house, Victoria will talk with her brother and suggest that he put some space between himself and Chelsea, then continue his political run. Nick will refuse. They’ll discuss Billy a bit, who is putting effort into staying healthy. Afterwards, Nick will call Michael Baldwin (Christian LeBlanc) and say that he needs to see Simon immediately.

Finally, on Monday’s new episode of Y&R, at his therapist’s office, Billy will suggest that he might be projecting his anger. They’ll discuss, and Billy will wonder if he’s self-sabotaging. Billy will then go back to Jabot and apologize to a skeptical Kyle. Billy will say that he hasn’t always dealt with the family legacy in the best way, but he’ll try to do better.

Be sure to tune in on Monday to catch up on everything happening on Y&R right now. Check Soap Opera Spy often for updates, news, rumors, and spoilers!