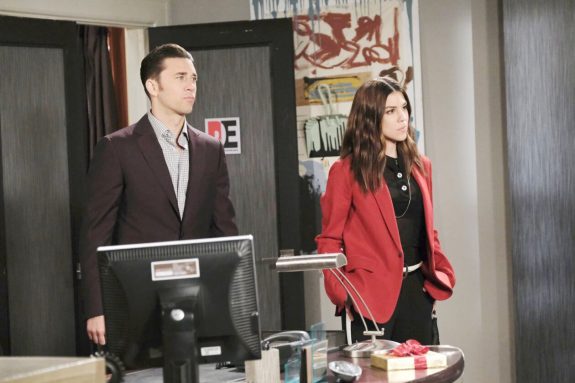 Days of Our Lives spoilers for Monday, November 18 through Friday, November 22 promise another exciting week of drama and suspense for Days of Our Lives viewers. United States viewers, remember that your show may be partially or totally pre-empted on Tuesday, Wednesday and Thursday for the Trump impeachment hearings but you can find it on the NBC app or nbc.com after 8 pm est.

Days of Our Lives Spoilers – Weekly Preview: Everyone Wants To Know What Happened!

In the Days of Our Lives weekly preview, everyone wants to know what happened and how it happened during the one year that Days and Salem jumped ahead! First, we see Dr. Marlena Evans (Deidre Hall) coming home from her residency in Germany unexpectedly; as Hope Brady (Kristian Alfonso) stands in a wet camisole with John Black (Drake Hogestyn) drinking red wine, Marlena asks if she’s interrupting something! After one year, Hope is still Princess Gina! Then, Justin Kiriakis (Wally Kurth) is shown kissing Kayla Brady (Mary Beth Evans). Next, Abigail DiMera (Kate Mansi) is visiting Eve Donovan (Kassie DePaiva) in prison, as Eve shouts, “I’ve been set up!” Also in the prison, Ben Weston (Robert Scott Wilson) tells his father Clyde Weston (James Read) that he didn’t murder Jordan Ridgeway (Chrishell Hartley).

Ben’s cellmate, Will Horton (Chandler Massey) tells his husband Sonny Kiriakis (Freddie Smith) that he is the reason Adrienne Kiriakis (Judi Evans) is dead, and Jennifer Horton (Melissa Reeves) is in her hospital bed and devastated as she cries over Adrienne and wants to know what happened and how she died. Several short scenes follow, with Ciara Brady (Victoria Konefal) looking over her shoulder, Gabi DiMera (Camila Banus) rolling her eyes and Xander Kiriakis (Paul Telfer) turning his head. Then there is a flashback to when Justin found out about Adrienne; at Salem University Hospital, Kayla tells him they did everything they could, and he throws his head back and screams and wails!

Monday, Sonny opens up to Evan Frears (Brock Kelly), as they sit having lunch on a bench in Horton Town Square. Sonny remarks that the food is really good, and the two men get further acquainted with each other. Chad DiMera (Billy Flynn) and Abby argue about Stefano DiMera (most recently Joe Mascolo) and the texts and emails that Chad has been receiving. Abby argues that Chad should set up a face to face meeting to make sure it’s really Stefano, although he is certain it is. The two argue the point. Also on Monday, Kayla and Justin reminisce about how they came together and Marlena throws a monkey wrench into Princess Gina’s plans as she interrupts Gina in the process of trying to seduce John Black (Drake Hogestyn), only he’s too drunk to notice!

Tuesday, Ciara snoops around Xander’s office. She suspects that her grandfather Victor Kiriakis (John Aniston) hired Xander to kill Jordan, and looks for anything that might be evidential. Meanwhile, back at the prison, Eve Donovan summons Abigail – she wants her help in being exonerated for pushing Jennifer over the balcony railing at The Bistro. Also on Tuesday, Sarah Horton (Linsey Godfrey) and Xander bond over baby Mackenzie “Mickey” Horton (the May twins) and Chad is put to the challenge.

Wednesday, at the prison, Ben is horrified by Clyde’s confession – that he worked his connections and has arranged to have baby Mickey kidnapped so he can have leverage over Xander! Later, Sarah is with the baby in Horton Town Square and is distracted for a moment, turns around, and Mickey is gone! She frantically tells Xander her baby is missing! Also on Wednesday, Sonny confides his situation with Will to Chad, and Eve urges Abigail to investigate Jennifer’s fall further.

Thursday, Clyde will put the screws to Xander anonymously, by sending him a text from a burner phone telling him Mickey will be returned if Xander writes a written confession that he murdered Jordan and delivers it to the Salem Police Department. Meanwhile, Jennifer receives devastating news from the past year when she learns how Adrienne Kiriakis died. Also on Thursday, Ciara takes matters into her own hands and Eric Brady (Greg Vaughan) informs Roman Brady (Josh Taylor) about his big plans for the future.

Friday, Eric has a surprise for Nicole Walker (Arianne Zucker) and it’s a good possibility he will propose to her and have an engagement ring for her! Meanwhile, Abigail catches Eli Grant (Lamon Archey) going through Chad’s laptop. This has nothing to do with Stefano, this is because Gabi suspected that Chad was plotting against her at DiMera. However, if Abigail doesn’t get there quickly enough, Eli might find out some astounding information about Stefano’s survival as well! Also on Friday, Ciara plays a dangerous game of cat and mouse, and Xander hands in his confession to Hope. It sounds like Hope Brady is back as Salem Police Commissioner, all the while never being suspected of having been turned into Princess Gina!