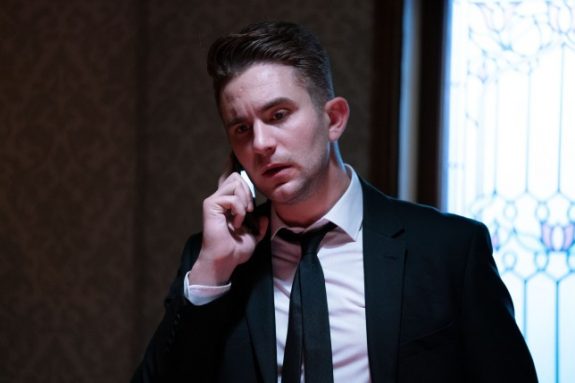 Ben is concerned about Callum’s decision to join the police force. He is brutally honest and admits that he doesn’t know if they have a future together if he moves forward with his plan. It is causing conflict for the two characters. Is there a way that Callum can offer some sort of compromise? Or will he have to choose between Ben and a career in law enforcement?

Eastenders Spoilers: Sharon’s Deadly Race Leads to Horrific Crash – Is This the End for Mel?

Fans can also expect to see Ben threatening Martin’s family. As seen on the soap opera, Martin was dealing with being blackmailed by the character. It was a storyline that went on for several months as Martin had to do Ben’s dirty work.

Things came to a head last month, but the situation may continue spiraling in this storyline. It is teased that Ben ends up issuing threats to Martin’s family. There is increased pressure on him to complete another job.

Eastenders spoilers for Monday reveal that Ben’s threat didn’t go unnoticed. His own mother, Kathy, happens to witness the whole thing go down. It seems that she is now seeing her son without blinders on. Will she do anything about it, though?

It is confirmed that Kathy isn’t too pleased at what is happening. She decides that there is no other option but to confront Ben about what she overheard.

Kathy has the conversation with Ben to express her disapproval. She also instructs him to use a different — and more effective — approach when it comes to his job. However, will Kathy’s stern reprimand really be enough to change the bad boy?

What do you think is going to happen with Callum and Ben? Can they come to a resolution or will they be parting ways? Will we see any changes in Ben’s ways after Kathy’s “strong suggestion?” Fans will have to keep watching the soap opera to see how these two storylines unfold.