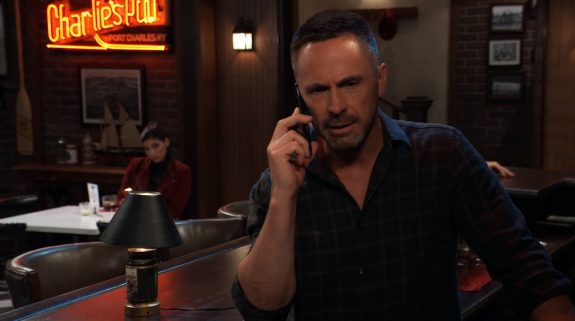 Diane Miller (Carolyn Hennesy) joins them as Sam is lead into the courtroom. The court is called to order, the prosecuting attorney isn’t there. Diane asks for a dismissal. Diane pleas Sam’s case saying the charges are outright lies. Diane questions why Sam would go after Shiloh Archer (Coby Ryan McLaughlin) unarmed. The attorney arrives saying he has been interviewing Shiloh’s friends. The attorney refers to Shiloh as a hero. The lawyer is ordered to take his seat. Jason is called to the stand. Sam gives her statement. Sam tells the court how Shiloh admitted to murdering his father.

Sam talks about how Shiloh had planned to rape her. Jason says he shot Shiloh and went straight to Sam. The attorney tries to bring up Jason’s past assault on Shiloh. The attorney asks if Jason could have defended himself if Sam hadn’t shot Shiloh. The judge stops the questioning after Diane objects. The attorney claims that Sam made sure there were no cameras working on the boat so she could murder Shiloh. The judge has heard enough and retires to her chambers to decide Sam’s fate. The judge returns with the verdict.

General Hospital Spoilers: Finn Races The Clock To Save Alexis! Will He Be Too late?

General Hospital’s Brad Cooper (Parry Shen) thanks Lucas Jones (Ryan Carnes) for lunch. Brad says he and Lucas are stronger than ever. Lucas tells Brad he cut all ties with Julian Jerome (William DeVry). Lucas knows Brad will miss Julian, they were close. Lucas misses the father who raised him, not Julian. Liesl Obrecht (Kathleen Gati) approaches Lucas who accuses her of blackmailing Brad. Lucas tells Liesl they will turn evidence over to the court against her.

Liesl threatens to tell the whole truth about Wiley Cooper Jones (Theo and Erik Olson). Lucas tells Liesl there is nothing he doesn’t know about his husband. Brad interrupts. Liesl warns Brad that the truth will come out if he doesn’t control Lucas’ attitude. Liesl leaves and Lucas tells Brad he doesn’t believe that he’s cut ties with Liesl.

General Hospital’s Franco Baldwin (Roger Howarth) arrives at Kim Nero’s (Tamara Braun) apartment and tells her he can’t leave Port Charles with her. Kim learns that he can’t leave because of Franco. “Drew,” says Franco sacrificed himself for Franco and for Cameron Webber (William Lipton). Kim offers to stay in Port Charles. “Drew,” says he is going to have the procedure reversed.

Kim begs him not to go through with this. This life is Franco’s, he has to try. Kim refuses to stay and watch this. Without Drew, there is nothing left for her in Port Charles. “Drew” wishes he could have loved Kim the way she deserved to be loved. Kim says you did once. Kim and “Drew” hug and he leaves with an I love you. Kim sobs.

General Hospital’s Julian is at Charlie’s looking at a shirt that says I love Grandpa. Brook Lynn Ashton (Amanda Setton) arrives and orders a drink. Julian doesn’t hear her. Brook demands his attention and asks for a drink again. Julian calls Lucy Coe (Lynn Herring) and threatens to sue her and Olivia Quartermaine (Lisa LoCicero). Brad arrives with a deal for Julian. Brad is willing to let bygones be bygones.

Brad will convince Lucas to give him another chance as long as Julian doesn’t expose their secret. Julian agrees to Brad’s terms before throwing everyone out of Charlie’s. Brook stays at Charlie’s on the phone and demands Julian give her a drink after the bar is closed. Brook tells Julian she’s a stranger he can talk to her.

General Hospital’s Liz Webber (Rebecca Herbst) and Hamilton Finn (Michael Easton) speak at the hospital. Liz knows about the tea party and Anna Devane’s (Finola Hughes) return. T.J. Ashford (Tajh Bellows) tells Alexis Davis (Nancy Lee Grahn) that she could have ingested rat poisoning. Finn thinks running a test is a good idea. T.J. could be wrong but the symptoms are so specific. Finn and T.J. ask Alexis about restaurants she has eaten out lately. Liz returns with the results, they are positive for thallium.

Finn asks Alexis about anything new she has tried lately. Alexis says only the supplement that Kendra Lennon (Michelle Argyris) gave her. Alexis says he had the supplement checked out already. Liz brings Alexis her first dose of medication to counteract the poison. Finn wonders if someone could be poisoning Alexis on purpose. Alexis gets a text from Kendra asking how she is. Alexis tells Kendra she is going to live. Franco approaches Liz and needs to talk to her.