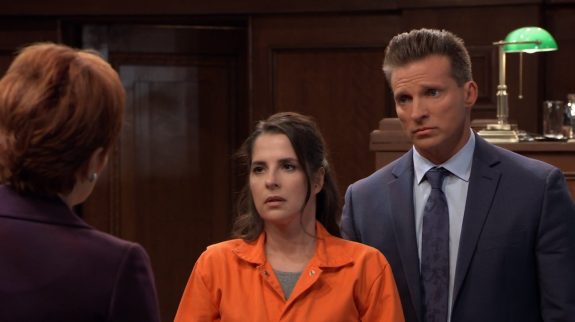 General Hospital (GH) spoilers for Tuesday, November 19, tease that some exciting story developments are on the way. Before we get to those, we have a programming note to pass along. Due to impeachment hearings coverage, it seems likely Tuesday’s episode will be preempted and held back for a later date. The show will make an official announcement at some point, but just keep the possibility in mind.

Now let’s talk about what’s happening in Port Charles. First, Kim Nero (Tamara Braun) will wish Hayden Barnes (Rebecca Budig) well. It appears Hayden will be moving into Kim’s old place, so Kim will offer some kind words. She’ll hope Hayden will be as happy there as she was.

General Hospital Spoilers – Is Carly Getting Too Close To Jax? Sonny Suspicious

Of course, Kim desperately wants to be with Elizabeth Baldwin’s (Rebecca Herbst) husband, so this chat could put Hayden in an awkward position. Hayden supports her sister, but she probably won’t be too hard on Kim here. After all, Hayden knows what it’s like to want another woman’s man!

At GH, “Drew Cain” aka Franco Baldwin (Roger Howarth) will leave Liz completely floored. She’ll marvel at “Drew’s” change of heart after he insists this life belongs to Franco. “Drew” intends to let Franco keep his promise to Liz – at least if he can. There’s no guarantee the memory procedure will work, but “Drew” feels he has to try.

Other General Hospital spoilers say Lucas Jones (Ryan Carnes) will blast Brad Cooper (Parry Shen) once again. Just when Brad thinks he’s put out one fire, another one flares up. Now Lucas fears there are more secrets and he’s had enough. Despite Brad’s attempts to wiggle out of this, Lucas will keep pushing. He’ll wonder why everyone’s after Brad and rant about his husband never truly coming clean.

At Charlie’s Pub, it seems Julian Jerome (William deVry) will tell a very censored version of the story to Brook Lynn Ashton (Amanda Setton). She’s the lady who’s been bugging Julian, but she’ll try to offer useful advice on Tuesday. Brook Lynn will ask why Julian would risk getting burned. She’ll suggest Julian should get out while he still can, but he may counter that it’s not that simple.

Over with Olivia Quartermaine (Lisa LoCicero), she’ll arrive at Sonny Corinthos’ (Maurice Benard) place with a special delivery. Perhaps it’ll be something from or about Dante Falconeri (Dominic Zamprogna). Olivia will insist that they should open it together, so it makes sense that it would involve their son.

Ned Quartermaine (Wally Kurth) will console Olivia later this week, so she probably won’t get good news. On the bright side, Ned definitely has some good news in his future. Brook Lynn is his daughter, so he’ll get a visit eventually. Ned should be pleased to see Brook Lynn back in town, but he may be suspicious of her sudden return.

Other General Hospital spoilers say Sam McCall (Kelly Monaco) will anxiously await her verdict. The judge is ready to reveal Sam’s fate, but it doesn’t look like she’ll get the outcome she wants. We know Sam will be distraught on Tuesday, which could mean she’ll be declared guilty. Diane Miller (Carolyn Hennesy) fought hard, but it may not have been enough to secure Sam’s freedom.

Jason will turn to Damian Spinelli (Bradford Anderson) for help soon, so let’s hope they can get Sam out of this jam ASAP! We’ll give you updates as other GH details emerge. Stay tuned to the ABC soap and don’t forget to check back often for the latest General Hospital spoilers, updates and news.