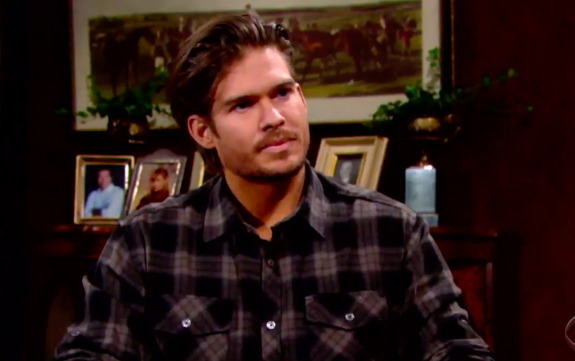 The Young and the Restless spoilers for Tuesday, November 19, tease that things are going to heat up on the CBS drama. But before we get to that, we have a programming note to pass along. There are impeachment hearings scheduled for Tuesday in both the morning and the afternoon, so there’s a very good likelihood that Tuesday’s show will be pre-empted. But in the event the show airs on Tuesday, here’s what you can expect.

First off, Phyllis Summers (Michelle Stafford) will be at The Grand Phoenix when she encounters Chance Chancellor (Donny Boaz). She’ll overhear him on the phone talking about going to the Maldives. Separately, Abby Newman (Melissa Ordway) and Nate Hastings (Sean Dominic) will chat and Abby will say that she feels awful about him facing the possible loss of his medical license.

Amanda Sinclair (Mishael Morgan) will then arrive and pull Nate away to strategize for his hearing, but he’ll remain interested in Abby and Amanda will walk him out. Phyllis will needle Chance some more about his connection to Adam Newman (Mark Grossman). Then she’ll talk with Abby and pass along that Chance is headed to the Maldives. Abby will then talk with Chance, who might want a room at the hotel if it’s too crowded at the Chancellor place.

The Young and the Restless (YR) Spoilers: Theo Invades Kyle’s Territory, How Will He React?

Next on Y&R, Mariah Copeland (Camryn Grimes) will chat with Kyle Abbott (Michael Mealor) over lunch. He’ll gripe about Billy Abbott (Jason Thompson) and the problems they are having getting along at Jabot, and the topic of Theo Vanderway (Tyler Johnson) will come up as well. Mariah will note that Kyle is doing the same thing to Theo that Billy is doing to him, and she’ll be particularly dismayed to learn that Summer Newman (Hunter King) is Kyle’s big confidante.

Young And The Restless Spoilers: Theo Vanderway Gets Advice

Next on Y&R, at Crimson Lights, Summer and Theo will chat, and Summer will hear about Theo’s Paris job offer. Summer will think that Genoa City would be boring without him, but she wouldn’t want to hold him back. Theo will wonder if it would change him if he took the job and moved away, and they’ll go back and forth about the pros and cons.

After Summer leaves, Theo will watch as Nate and Amanda arrive and Lola Abbott (Sasha Calle) greets them. In so doing, Lola will say that she and Kyle couldn’t be happier, which will deflate Theo. After, Amanda will practice her closing statement on Nate, and she’ll give him tips for giving his statement.

Theo and Lola will talk as well, and he’ll ask her what she’d think of him if he took the Abbotts up on an opportunity that was offered. Lola will encourage him to embrace the opportunities he’s given while holding onto who he is.

Next on Y&R, Phyllis and Summer will chat at The Grand Phoenix. Summer will mention Theo’s big opportunity, and Phyllis will opine that Kyle should be the one to leave…with Lola. This will lead to some bickering, and Phyllis will be peeved that Summer is defending Kyle after everything he’s done.

Meanwhile, Chance will inspect the hotel security system with Abby standing by, and he’ll find out that the software was reinstalled overnight. He’ll worry that someone had a back door into their wi-fi system. Abby will be peeved, and after Chance leaves, Abby will angrily confront Phyllis and say that she just found out something very interesting about her.

At Kyle and Lola’s apartment, Kyle will tell Lola that he’s going to ease off of Theo and give him a chance, which will please Lola. And at Society, Theo will tell Ashley Abbott (Eileen Davidson) that he’ll take her up on her offer.

Finally, on Tuesday’s new episode of Y&R, Amanda and Nate will regroup at Crimson Lights after his hearing. Amanda will note that Victor Newman (Eric Braeden) really came through. Nate will say that he’ll never forget how passionately she fought for him. Nate will then get a call and find out that he’s keeping his license.