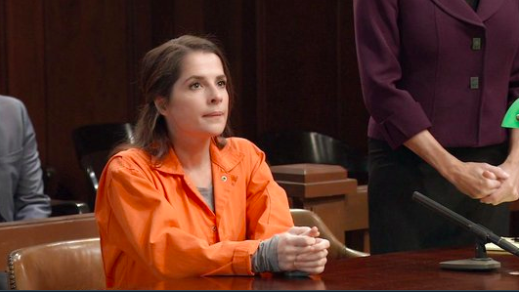 Liz asks what they have to talk about since he already said goodbye. Franco wants to know what Liz didn’t tell him about Drew Cain (Billy Miller) saving him as a child. Liz didn’t think it was her place to tell “Drew” about Franco’s past. Franco is shocked that Liz was loyal enough to not share information about his past. “Drew,” says this life belongs to Franco and he’s going to give it back.

Meanwhile, General Hospital’s Hayden Barnes (Rebecca Budig) shows up at Kim Nero’s (Tamara Braun) apartment. Hayden has decided to rent the place. Kim shows Hayden the apartment and tells her about the neighbors before dropping a bear.

Hayden assumes that Kim is a mom. Kim needs to heal before she can be with anyone. Hayden wants to share a toast with Kim before she leaves. Kim tells Hayden to wait and celebrate with someone special and leaves.

Finn and Anna agree that they have missed each other. Finn wants to know if Anna is going to go after Alex Marick (Finola Hughes) if a lead comes up. Anna asks Finn if he’s still her fiance’ now that he has a daughter. Finn wants to talk about Violet Barnes (Jophielle Love) later. Finn needs Anna’s help to figure out custody and all. Finn wants Violet to be close to Anna too. Anna wishes she could see into the future. Finn is obsessed with trying to figure out what comes next. Finn gets a message from Harrison Chase (Josh Swickard). Finn promises to hurry back.

General Hospital’s Brook Lynn Ashton (Amanda Setton) wants to be friends with Julian Jerome (William DeVry). Brook asks Julian what made him mad enough to close the place. Julian says they have family issues. Brook spent years staying away from her family. Julian says his associate cannot be trusted. Brook says he needs to cut his loses. Julian thanks Brook for listening to him and tries to pay her for her time. Brook throws the money back at him and leaves.

General Hospital’s Lucas Jones (Ryan Carnes) accuses Brad Cooper (Parry Shen) of still having secrets dealings with Liesl Obrecht (Kathleen Gati). Lucas says if Brad loved him it would not be so hard, to tell the truth. Brad tries to convince Lucas that Liesl is after him like Julian was. Brad says everyone is jealous because he and Lucas are happy and they aren’t.

Lucas says Brad is the one who seems unhappy. Lucas has no idea what Brad has done for this family. Lucas wants Brad to confide in him. Lucas begs Brad to talk to him. Brad has been the one shouldering the burden of the family. Brad is telling Lucas how he’s feeling. Lucas tells Brad he is keeping secrets. Brad storms out of the room. Brad goes to see Julian who refuses to speak to him.

General Hospital’s Olivia Quartermaine (Lisa LoCicero) has invited Sonny Corinthos (Maurice Benard) over to discuss something with him. Olivia tells Ned Quartermaine (Wally Kurth) that she hopes he doesn’t mind. Olivia has a package from the WSB that she wants Sonny to open with her. Sonny opens the envelope, it’s all the letters Olivia wrote to Dante Falconeri (Dominic Zamprogna). Sonny gives Olivia a note from Dante. Dante wants her to stop writing to him. Olivia shows Ned the letter from Dante. Olivia says Dante thinks he is protecting them but he isn’t. Brook walks in demanding to know why they are redecorating the yard.

General Hospital’s Sam McCall (Kelly Monaco) is found not guilty of murder. The judge finds Sam guilty of manslaughter. The judge hears arguments for sentencing. The prosecutor brings up Sam’s past as a con and connections to the underworld. Diane argues that Sam is a productive member of society. Sam is sentenced to two years in prison but recommends probation or parole to the parole board. Diane doesn’t think they can get an appeal. Jason tells Sam to take one day at a time, they will get through this. Sam gives Jason Morgan (Steve Burton) instructions about the kids before she is lead off in cuffs.

Anything can happen in Port Charles, so stay tuned to General Hospital, airing weekdays on ABC. And don’t forget to check back here regularly for all your General Hospital news, information and spoilers!