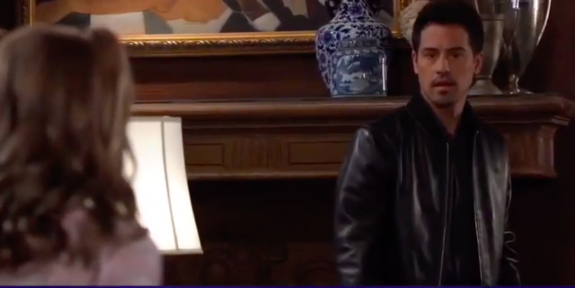 General Hospital (GH) spoilers for Wednesday, November 20, tease that some great action’s ahead in Port Charles. We should note that a preemption is possible due to ongoing impeachment hearings coverage. If that happens, the show will release an official announcement on whether they’ll air a partial episode, post online or bump it to the next day. Now let’s get to some hot GH drama.

For starters, Hamilton Finn (Michael Easton) will face backlash for leaving Harrison Chase (Josh Swickard) out of the loop. Chase will be upset with his brother for not telling him about Violet Barnes (Jophielle Love), but he needs to give Finn a break! Poor Finn had a lot to wrap his head around. The daughter he never knew he had finally came into his life, so he deserved a chance to process that information.

While Finn explains himself to Chase, Hayden Barnes (Rebecca Budig) will ask Anna Devane (Finola Hughes) about her upcoming wedding. She’ll wonder if it’s still on, and Anna will undoubtedly confirm that it is. Finn and Anna don’t have their nuptials all planned out yet, but they’re still engaged and planning to spend the rest of their lives together. Of course, a lot can happen between now and whenever they tie the knot!

Speaking of tying the knot, Jasper “Jax” Jacks (Ingo Rademacher) will refuse to attend Nina Reeves’ (Cynthia Watros) upcoming wedding. He’ll let her know he won’t be there and most likely wonder why Nina’s even going through with this. Why is Nina so determined to give Valentin Cassadine (James Patrick Stuart) another shot? It’s probably because she’s playing Valentin, but will Nina admit that to Jax on Wednesday? She’ll indeed confide something in Jax, so she just might.

Other General Hospital spoilers say Valentin will show up at Shadybrook to discuss Helena Cassadine’s (Constance Towers) portrait. He’ll bring it up to Ava Jerome (Maura West) and perhaps wonder what it’s going to take to get it back. Valentin will certainly toss around some threats if need be, but Ava may not be willing to budge.

At Wyndemere, Charlotte Cassadine (Scarlett Fernandez) will confront an intruder. She’ll find Nikolas Cassadine (Marcus Coloma) in her living room, so she’ll demand to know what he’s doing there. Naturally, Charlotte won’t know this is Nikolas. She’ll only know him as the man she saw briefly down by the pier, but she’ll undoubtedly realize he’s trouble!

Carly will do her best to settle Jason down, but he’ll be more interested in taking action. Jason will contact Damian Spinelli (Bradford Anderson) soon and get the ball rolling on their latest strategy. Next, Brook Lynn Ashton (Amanda Setton) will joke around with Sonny Corinthos (Maurice Benard). She’ll wonder if he’s still driving the ladies wild, so we’ll see Sonny flash a grin and those familiar dimples.

As for Ned Quartermaine (Wally Kurth), he’ll likely be a bit suspicious about his daughter’s sudden comeback. Why now? What’s Brook Lynn got up her sleeve? General Hospital spoilers say that’s for Brook Lynn to know and everyone else to find out! We’ll give you updates as other GH news and rumors emerge. Stay tuned to the ABC soap and don’t forget to check back often for the latest General Hospital spoilers, rumors, updates and news.