The Bold and the Beautiful Spoilers: Wednesday, November 20 – Thomas Explains Himself After Reappearing To Hope – Shauna Reassures Ridge 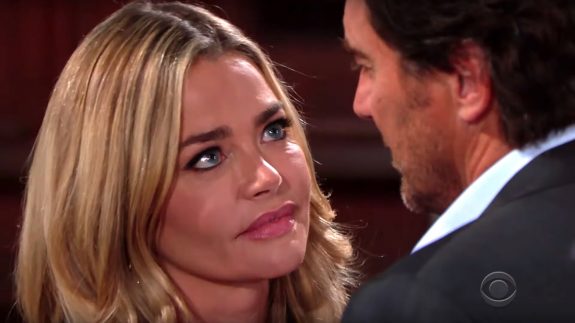 The Bold and the Beautiful spoilers for Wednesday, November 20, tease that things are getting exciting on the CBS drama. But before we get to that, we have a programming note to pass along. There are impeachment hearings scheduled for Wednesday, so there’s a chance that Wednesday’s episode will be pre-empted. But in the event the show airs on Wednesday, here’s what you can expect.

As B&B viewers know, Thomas Forrester (Matthew Atkinson) has just appeared in Hope Logan’s (Annika Noelle) room. Hope was sitting by herself and overcome with grief about what had happened to Thomas. She was under the belief that she pushed him to his death into a vat of acid at Forrester Creations. But then Thomas just walked right into the dark room, and Hope ran straight into his arms.

The Bold and the Beautiful Spoilers: Steffy’s Discovery Leading To Hope’s Downfall

It was an emotional reunion, but now Hope will probably have some questions for Thomas about how he survived the ordeal. He must have fallen into water instead of acid, and fortunately he survived the fall and didn’t drown. Hope will need to hear the whole story, which will probably reveal that Thomas was the man in the yellow hazmat suit who shooed Hope out of the area shortly after his fall.

But where has Thomas been since the accident, and why is he just now coming back? And how did he manage to get into Hope’s room? B&B viewers know that Thomas can be pretty sneaky, so it’s possible that he might have been present in the mansion when Brooke Forrester (Katherine Kelly Lang) and Hope were talking earlier. And if that’s the case, then he likely overheard Brooke urge her daughter to keep what happened to him a secret.

Of course, B&B viewers know that Hope refused to do as her mother wanted and vowed to tell Ridge Forrester (Thorsten Kaye) and Steffy Forrester (Jacqueline MacInnes Wood) the truth about what happened to Thomas, no matter how unpleasant it would be. If Thomas overheard that exchange, perhaps he decided to make his presence known to Hope to keep her from having to confess and get in trouble.

The Bold and the Beautiful spoilers indicate that Thomas will have it out with Brooke later in the week, so it looks like he won’t appreciate Brooke trying to keep his “death” under wraps. He’ll later taunt Brooke and insist that she confess what she knew and what she hid from Ridge. That’s going to blow up Ridge and Brooke’s marriage, which will be exactly what Thomas wants.

The Bold And The Beautiful Spoilers: Hope Tells Liam She Killed Thomas – But Not Until Much Later https://t.co/DkwTmayHgP pic.twitter.com/8b1K8cV5zT

Meanwhile, on Wednesday’s new episode of B&B, Ridge and Shauna Fulton (Denise Richards) will spend some quality time together. As B&B viewers know, he’s been beside himself since he found out about the indecent proposal that Thomas made to Hope and how he chased Hope around Forrester Creations. Ridge thought Thomas was doing better and getting better, but he now feels like he failed his son.

Shauna will be there for Ridge and offer him her support. She’ll likely point out his strengths as a father and note that nobody is perfect as a parent and that he should beat himself up so much over the choices that Thomas is making as an adult. According to B&B spoilers, there will be some more flirting between Ridge and Shauna, and Shauna will point out how he has never given up on Thomas.

It looks like Shauna will end up helping Ridge see things in a more positive light, as B&B spoilers indicate that Ridge will end up telling Shauna that he may not have lost Thomas after all. Perhaps Ridge will get a call from Thomas after he’s made his presence known to Hope. At any rate, we should see a reunion between father and son soon.