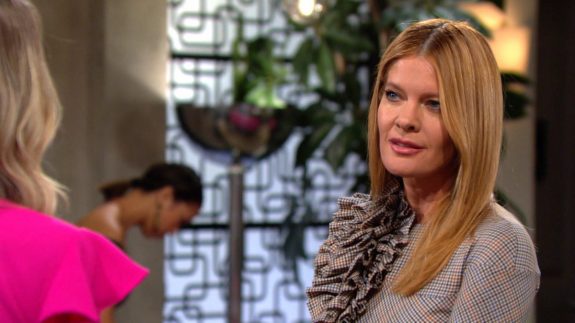 The Young and the Restless spoilers for Wednesday, November 20, tease that things are getting exciting on the CBS drama. But before we get to that, we have a programming note to pass along. There are impeachment hearings scheduled for Wednesday, so there’s a chance that Wednesday’s episode will be pre-empted. But in the event the show airs on Wednesday, here’s what you can expect.

At The Grand Phoenix, Abby Newman (Melissa Ordway) will confront Phyllis Summers (Michelle Stafford) about the issues that Chance Chancellor (Donny Boaz) detected with the security system. She’ll accuse Phyllis of finagling backdoor access to devices hooked into the wifi and wiping the system to cover what she did. Phyllis will vehemently deny it and deflect by pointing out Chelsea Lawson’s (Melissa Claire Egan) responsibility for the hostage standoff.

The Young and the Restless Spoilers: The Newman Family Thanksgiving Anything But Thankful

Chelsea, who will be there as well, will apologize for what she did, but Abby will tell her to take the day off. Abby will then tell Phyllis that she’s fired for her calculated move against the hotel. Phyllis will balk, noting that Abby can’t fire her and has no proof of her claims. Afterwards, Abby will leave Chance a voicemail thanking him for saving the hotel.

Young And The Restless Spoilers: Simon Black Makes A Promise

Next on Y&R, Nick Newman (Joshua Morrow) will visit with Simon Black (Jeffrey Vincent Parise). Nick will tell Simon that his business with Chelsea is over, and that they’ll deal directly from now on. Nick will say that he’ll use the full Newman resources to go after him if he persists against Chelsea. Simon will say he’s done with Chelsea, and Nick will hope so.

Meanwhile, Billy Abbott (Jason Thompson) will talk with Victoria Newman (Amelia Heinle) at Newman Enterprises. He’ll indicate that he had an epiphany and that he knows what he needs to do. Victoria will say that she thinks it’s a big move, and Billy won’t have any doubts. She’ll kiss him and wish him luck.

Next on Y&R, at the Abbott estate, Jack Abbott (Peter Bergman) and Traci Abbott (Beth Maitland) will discuss the Abbott book – they should be done within days. Traci will say that she’ll then move onto another project, but Jack will say he doesn’t know what he’s going to do. That will surprise Traci, who thought that Jack would return to Jabot.

Billy will then arrive, and he’ll talk with Jack privately. He’ll say that he can’t continue at Jabot, and that he’s had an epiphany and that heading a cosmetics company just isn’t what he wants anymore, so he’s resigning. Jack will be shocked, and Billy will explain that he’s come to this decision on things he’s learned in therapy. He just won’t want to carry the family legacy anymore – he’ll just want to be himself.

Later, Jack will tell Traci about the development, and she’ll be happy for Billy. Jack will then get a text about Theo Vanderway (Tyler Johnson) accepting Ashley Abbott’s (Eileen Davidson) job offer in Paris. Traci will note that this is a lot of news for one day and will ask what Jack’s going to do about it.

The Young and the Restless (YR) Spoilers: Phyllis Keeps Pushing – What Happened In Vegas Didn’t Stay In Vegas https://t.co/0okRGH77KE pic.twitter.com/cBFml9SLqW

Next on Y&R, Nick will talk with Chelsea at home about his visit with Simon, and he’ll relay that Simon’s no longer a threat. Talk will turn to the subject of their relationship, and Nick will note that they need to deal with what’s going on between them. Nick will admit to being angry, scared, and confused, and he’ll say that he loves her, but that they have trust issues. They’ll agree to be transparent with each other, and then Connor Newman (Judah Mackey) will call fresh from a nightmare. Nick will say that Chelsea should go.

Back at Newman Enterprises, Billy will update Victoria about his discussion with Jack. She’ll ask him what’s next for him, and Billy won’t know, but he’ll want to spend time with the kids. Billy will want to celebrate with her, then he’ll say that he and Jack will make Kyle Abbott (Michael Mealor) the happiest guy alive.

Next on Y&R, Simon will call his lawyer from jail and say that he wants a meeting with the Feds. He’ll say he’s got information they might find useful about Colin Atkinson (Tristan Rogers).

Finally, on Wednesday’s new episode of Y&R, Nick and Phyllis will find themselves together at Society. Phyllis will say that drinks are on her.