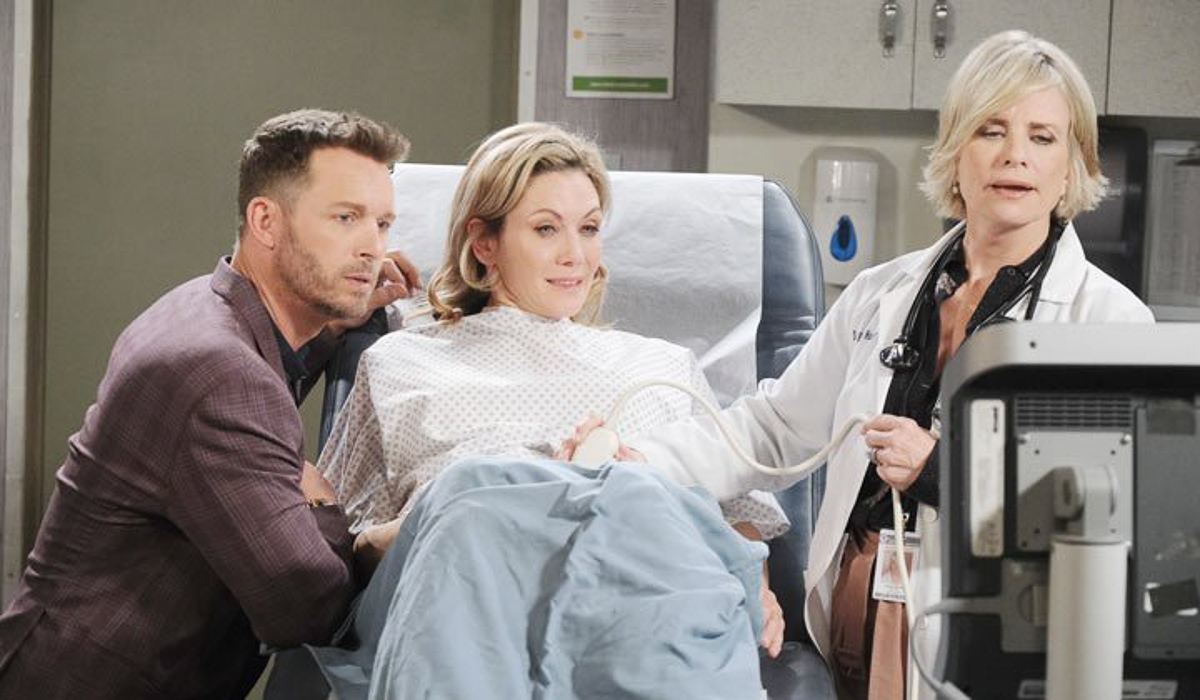 Days of Our Lives spoilers tease that Baby Mackenzie “Mickey” Horton (the May twins) may not really be Sarah Horton’s (Linsey Godfrey) and Eric Brady’s (Greg Vaughan) baby after all; was there a baby swap when baby Black/DiMera died? Is Mickey really Kristen DiMera’s (Stacy Haiduk) and Brady Black’s (Eric Martsolf)?

Days of Our Lives viewers will recall that before the one year time jump, both Sarah and Kristen were pregnant. Providing that both babies were full term, they would have given birth right around the same time. Recent Days of Our Lives episodes have revealed that Kristen and Brady’s baby girl died, and Kristen apparently killed Haley Chen over it; but since Kristen is now in a convent and obviously was not charged for Haley’s death, it could have been accidental. We know that Haley was killed falling down some stairs, and it’s possible that she and Kristen could have fallen down stairs together, and Kristen could have been ready to give birth and Haley may have tried to break Kristen’s fall but died, and Kristen could have gone into labor and her baby died shortly after birth. JJ Deveraux (Casey Moss) would consider such an accident a murder in his frame of mind! A recent Days of Our Lives promo showed both women with baby girls, but baby girl Black/DiMera was very tiny.

DOOL Spoilers – After All The Trouble And Second Thoughts Sarah Horton Had, What If Her Baby Died?

It was also revealed in recent Days of Our Lives episodes that Xander Kiriakis (Paul Telfer) claimed paternity for Sarah’s baby, after Nicole Walker (Arianne Zucker) and Sarah had agreed to keep her paternity a secret from Eric. Kristen almost, with the help of Dr. Wilhelm Rolf (William Utay) intercepted Sarah’s embryo when she went in to have an abortion, with the intention of having it implanted in her own womb. However, Rolf then told her she was pregnant herself, with her own child, and the implant of Sarah’s embryo was no longer needed! But what would have happened if Sarah’s baby had died? What would Xander have done, being in love with Sarah and wanting to spare her the devastation of a dead baby? Could both Sarah and Kristen have been in Salem University Hospital in labor at the same time, and Xander swapped babies, possibly in the nursery?

Days of Our Lives Spoilers: Xander and Sarah Bond Over Baby Mickey as Nicole Confesses to Eric https://t.co/N8iMOBrdx1 pic.twitter.com/IFYLpeA26R

It would not have been difficult at all for Xander to swap the babies, and then falsify the birth records and even records of their DNA; he’s done similar things before! Days of Our Lives viewers will recall when baby Holly Jonas (Scarlett and Harlow Mallory) was supposedly killed in a car crash, when she was really with her mother Nicole, who was also presumed dead, in a farmhouse near Chicago, Illinois. Xander faked the death record, and even set up a fake double car and put a mother and child’s corpses in the car, which went over an embankment and exploded! It wouldn’t surprise DOOL fans at all if he swapped Sarah’s dead baby for Kristen’s live baby and let Kristen and Brady suffer instead of Sarah!

Stay tuned to DOOL and keep checking Days of Our Lives spoilers frequently for all the latest news, updates and developments!