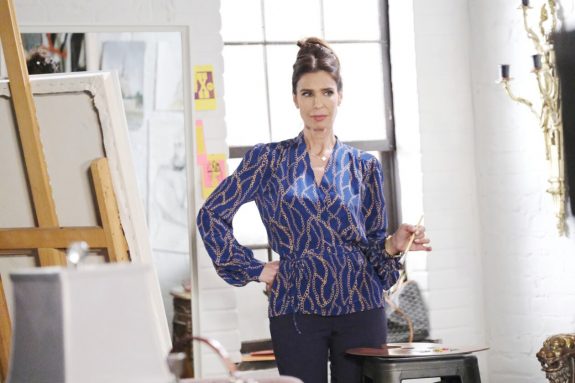 Days of Our Lives (DOOL) spoilers tease that Dr. Marlena Evans (Diedre Hall) was not at all happy to see Hope Williams (Kristian Alfonso) cozying up to her husband, John Black (Drake Hogestyn). Hope has been staying with and living as John’s roommate while Marlena has been away on extended business. It was obvious from Marlena’s comments and the fact that she asked Hope to find somewhere else to live that she didn’t appreciate Hope’s presence.

DOOL Spoilers: Marlena Should Realize That These Actions Aren’t Like Hope

It probably won’t be long until Marlena realizes that something is up with Hope. As viewers know, Princess Gina (also Kristian Alfonso) has been living as Hope for over a year thanks to chip implanted in Hope’s neck by Dr. Wilhelm Rolf (William Utay). Princess Gina has already tried to kill Jennifer Horton (Melissa Reeves) to keep that secret safe, but what will she do if Marlena begins to put two and two together.

Princess Gina arranged for Marlena to get the out of town assignment and she has been keeping the letters that John and Marlena had written to each other. Marlena and John will likely compare notes very soon and realize that someone has been trying to keep them apart. Given how Hope has moved in on John, Marlena should easily suspect her. But these action are totally unlike anything Hope would ever do. But Princess Gina has a long history with John and has taken over Hope’s body before, so it wouldn’t take much for these two to figure it out.

Days Of Our Lives Spoilers: Was Will Driving Drunk When Adrienne Died? https://t.co/8uuGMdwtHl pic.twitter.com/TCvXVT5Wc0

Days Of Our Lives Spoilers: Dr. Wilhelm is lurking around

And with Dr. Rolf lurking around Salem, it should be easy for Marlena and John to realize what’s going on? But will they? Hope needs to be rescued! The poor woman has been dormant for over a year and deserves her life back. Hopefully John and Marlena will realize the truth sooner rather than later!

Marlena is already suspicious, do you think she has any idea that Princess Gina is back? How long before Marlena and John piece it all together? Only time will tell, but stay tuned in to Days of Our Lives, airing weekdays on NBC! And don’t forget to check back right here for all your Days of Our Lives news, information and spoilers!