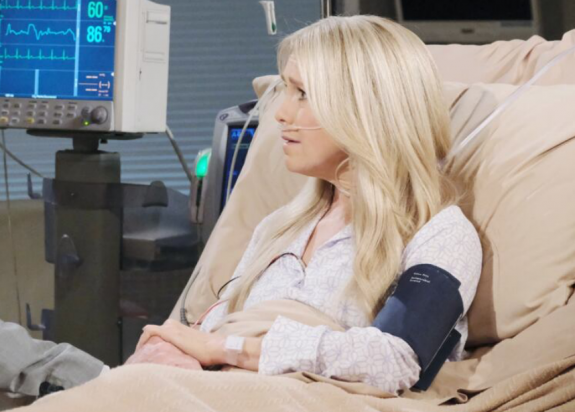 Days of Our Lives (DOOL) spoilers for Thursday, November 21, tease that some bombshells are brewing. Before we get to those, we have a programming note to pass along. Due to impeachment hearings coverage, it’s possible Thursday’s show will be preempted in your area. If that happens, you can always head over to NBC.com and catch up on what you missed. As of right now, there are no plans to bump any episodes on the schedule. That’s just something to keep in mind!

DOOL Spoilers: Jennifer Deveraux Will Be Devastated By Shocking News

Now let’s get to all the Salem shockers. First, Jennifer Deveraux (Melissa Reeves) will be devastated by the news of Adrienne Kiriakis’ (Judi Evans) death. It’ll hit her like a ton of bricks – much like it did for Adrienne’s loved ones at the time. Jennifer’s been stuck in a coma for a year, so she’s just now facing the crushing blow everybody else faced months ago.

Naturally, Jennifer’s going to have some questions about this stunning loss. She never expected to hear Adrienne was gone, so she’ll want to know what happened. How did Adrienne die? Days of Our Lives spoilers say Justin Kiriakis (Wally Kurth) will have a tragic tale to tell. He’ll explain the horrible events leading up to Adrienne’s sudden demise – including Will Horton’s (Chandler Massey) involvement.

Knowing Will’s responsible will leave Jennifer even more distraught. She’ll let Justin know she’s so sorry and wish she could’ve been awake to provide comfort. Jennifer certainly would’ve paid her respects and offered condolences if she could’ve. Nevertheless, Justin may suggest he’s just glad Jennifer pulled through. They were all in desperate need of some good news and Jennifer’s recovery fits the bill.

Days Of Our Lives Spoilers: Details Revealed About The Loss Of Adrienne Kiriakis’s Life

Of course, Days hasn’t revealed much about the accident that claimed Adrienne’s life, but perhaps that’ll change on Thursday. DOOL fans will hopefully get a few more details about what really went down. Over with Xander Kiriakis (Paul Telfer), he’ll respond to that ominous text message about the baby. Xander just learned he’ll get Mackenzie “Mickey” Horton back if he admits what he did.

Although Xander may not be sure what this is about, he’ll quickly get the picture. It won’t be long until Xander realizes he has to confess to Jordan Ridgeway’s (Chrishell Hartley) murder. There’s a good chance Xander is innocent, but he’ll plan to take his confession to the Salem PD anyway.

Other Days of Our Lives spoilers say Eric Brady (Greg Vaughan) will ponder the future. He’ll be ready to take a huge step forward with Nicole Walker (Arianne Zucker), so he’ll tell Roman Brady (Josh Taylor) all about it. Eric will want to marry Nicole, so expect a proposal by the end of the week – a proposal that’ll change everything!

It sounds like some great action’s on the way. We’ll give you updates as other Days news and rumors emerge. Stay tuned to DOOL and don’t forget to check back often for the latest Days of Our Lives spoilers, rumors, updates and news.