General Hospital Spoilers: Neil Puts The Pieces Together, Discovers Kendra Is The Culprit 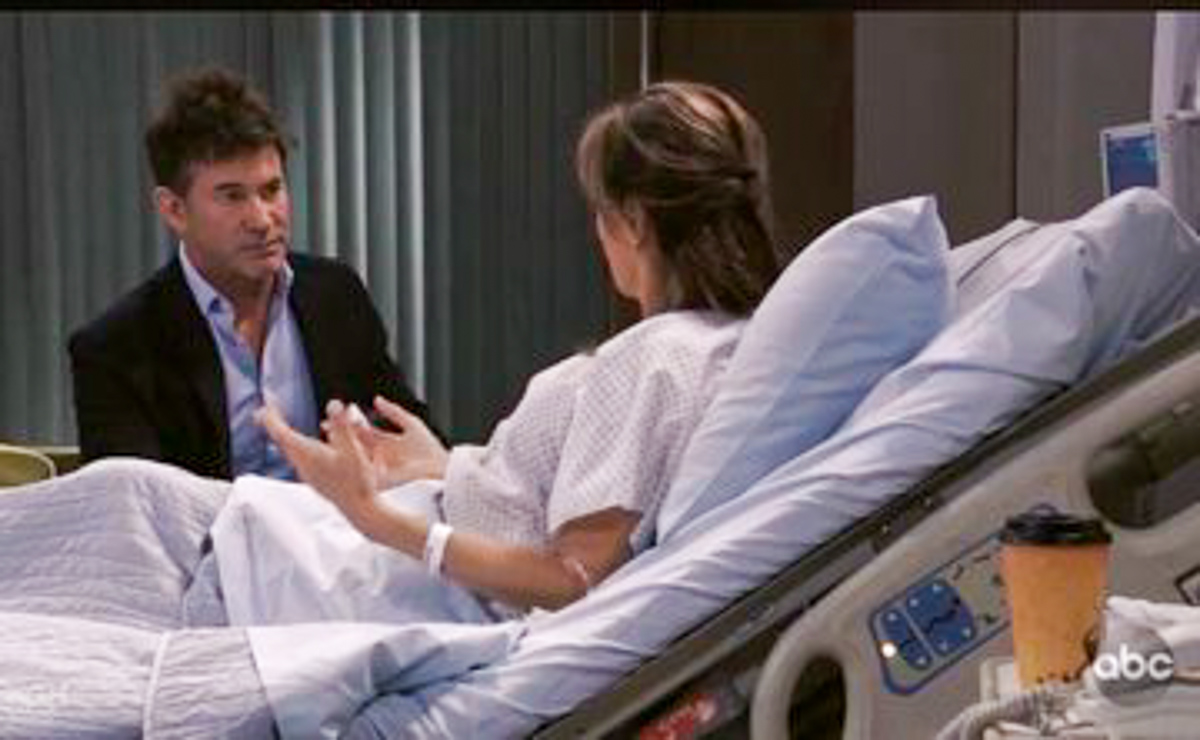 General Hospital spoilers tease that Dr. Neil Byrne (Joe Flanigan) will put the pieces together and point the finger at Kendra Lennon (Michelle Argyris) for the poisoning of Alexis Davis (Nancy Lee Grahn) in an upcoming episode of GH!

The new weekly promo for General Hospital, called “Secrets” shows Neil in Alexis’ room at General Hospital, obviously having told Alexis that he suspected Kendra of putting the rat poison in her nutritional drink. Alexis is incredulous, as she asks him again to verify he thinks it was Kendra who poisoned her!

Apparently Neil must have thought back to the night that she couldn’t eat the Chinese food he ordered and cut off their date early, and also recalled that she had just gotten done with a workout with Kendra and put two and two together and arrived at the conclusion that Kendra might be the one who poisoned Alexis!

At first, Alexis will not believe him and will tell him that his theory is incorrect; she can’t believe that Kendra, who she is incorrectly reading as so kind and so sweet and caring would ever do anything to harm her. Besides, what would her motive be? Alexis has defended criminals before and as an attorney, she knows that in order for a suspect to even become a suspect in a crime, the suspect has to have means, motive, and opportunity! Neither Alexis nor Neil at this point knows that Kendra Lennon is really Kendra Bauer, who is the much older sister of Kiefer Bauer (Christian Alexander), an abusive high school boyfriend of her daughter Kristina Corinthos-Davis (Lexi Ainsworth). Long time General Hospital viewers will recall that Alexis accidentally ran over Kiefer, resulting in his death, after seeing him leave her home and finding Kristina beaten nearly to death inside.

Distracted, she put Kristina in the back seat of her car and rushed her to General Hospital herself, resulting in a hit and run of Kiefer, whom Molly Lansing-Davis (Haley Pullos) and Sam McCall (Kelly Monaco) found in a ditch and although they got him to General Hospital, he later died of his injuries. Alexis received community service for the hit and run. Kendra found out about Alexis from Shiloh Archer (Coby Ryan McLaughlin) who got the information about Kiefer from Kristina’s pledge and contacted her with information on how to find her – apparently Kendra was a Dawn of Day member.

Meanwhile, Julian Jerome (William DeVry) thought Olivia Quartermaine (Lisa LoCicero) was putting dead rats around Charlie’s Pub because he wouldn’t give her the deposit back after she was going to buy him out, and had told Alexis about it. General Hospital viewers will recall that after Kendra put the rat poison in Alexis’ nutritional drink when they met at Charlie’s Pub the day before Alexis and Neil got together and he ordered Chinese food she couldn’t eat, that Kendra dumped the rest of the canister in the dumpster behind the pub and Julian even saw her there and asked what she was doing! Perhaps Neil and Julian will compare notes and Alexis will believe Neil when she remembers her conversation with Julian about the dead rats!