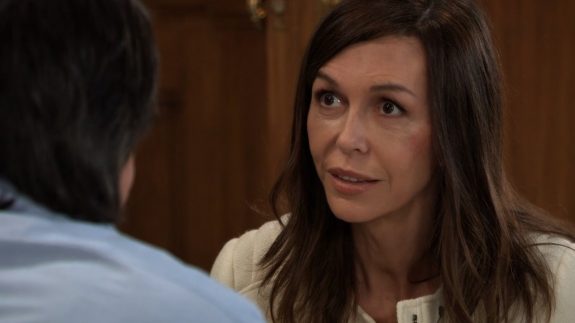 General Hospital (GH) spoilers for Thursday, November 21, tease that some tense moments are on the way. We should note that due to impeachment hearings coverage, GH bumped an episode on their schedule. The preemption means that the show meant for Wednesday, November 20, will now air on Thursday instead. With that in mind, let’s talk about all the drama that’s brewing.

Over with Carly Corinthos, she’ll embrace Jason Morgan (Steve Burton) after learning that Sam McCall (Kelly Monaco) got two years behind bars. Jason won’t be mad at Sam, but Carly will be. She’ll be furious for not letting Jason handle things his way, but she’ll think Sam will have to live with her choices. Carly will just want Jason to focus on being there for the kids and not doing anything too daring.

General Hospital Spoilers: Neil Puts The Pieces Together, Discovers Kendra Is The Culprit

Other General Hospital spoilers say Nina Reeves (Cynthia Watros) will deliver a wedding invitation to Jasper “Jax” Jacks (Ingo Rademacher). Jax will admit he’s not coming and warn Nina about being with a criminal. He’s seen how it can ruin a person’s life. Nina will ultimately confess that she’s not planning to marry Valentin Cassadine (James Patrick Stuart); she’s planning to destroy him.

Speaking of Valentin, he’ll pop in Shadybrook to speak with Ava Jerome (Maura West) about the portrait. Ava won’t be on board with negotiations, so she’ll eventually convince Valentin to leave. At the Metro Court, Anna Devane (Finola Hughes) will have a prickly conversation with Hayden Barnes (Rebecca Budig). When Hayden wonders if the wedding’s still on, Anna will wonder why Hayden thinks it wouldn’t be.

Talk will turn to Violet Barnes (Jophielle Love), so Anna will call Hayden out for robbing Finn of years with his daughter. She’ll think Hayden robbed Violet as well, but Hayden won’t be too concerned about that. After Hayden points out that Robin Scorpio-Drake (Kimberly McCullough) turned out OK, Anna won’t think it’s the same thing. She was protecting her daughter, but Hayden will contend that they both had their reasons.

Anna will want to hear more about those reasons. She’ll also want to make it clear that Violet is a wonderful addition to their life, but it is THEIR life – meaning Finn and Anna’s joint future. Anna will warn that Hayden shouldn’t get it twisted.

GH Spoilers: Charlotte Cassadine Will Be Alarmed To Find Nikolas Cassadine In Her Living Room

At Wyndemere, Charlotte Cassadine (Scarlett Fernandez) will be alarmed to find Nikolas Cassadine (Marcus Coloma) in her living room. She’ll realize he’s the same guy she saw on the pier, but Nik will assure Charlotte that it’s OK. He’ll lie about working for Valentin and serving as Charlotte’s secret bodyguard. Nikolas will push Charlotte to keep this between them or else he could get fired.

Afterward, Nik will listen in on Valentin’s phone call to Hayden. Valentin will summon Hayden to Wyndemere since they could be useful to each other. He’ll think Hayden needs to come hear what he has to say.

General Hospital Spoilers: Stella Henry Will Show Back Up In Town

Meanwhile, Stella Henry (Vernee Watson) will show back up in town. She’ll speak with Curtis Ashford (Donnell Turner) and Jordan Ashford (Briana Nicole Henry) about the time she’s been spending with her long-lost relative. Stella will also get a hint about T.J. Ashford’s (Tajh Bellow) good news, but Jordan and Curtis will want to let T.J. spill it himself.

Finally, Harrison Chase (Josh Swickard) will confront Finn about keeping his new daughter a secret. Finn will offer an apology and admit he’s been overwhelmed. Finn will show Chase pictures of his tea party with Violet and get some kind words from his brother. He’ll hope Chase can come over for a sleepover sometime.