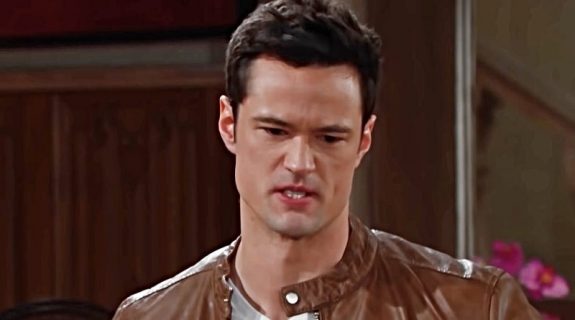 The Bold and the Beautiful spoilers for Thursday, November 21, tease that things are getting exciting on the CBS drama. But before we get to that, we have a programming note to pass along. There are impeachment hearings scheduled for Thursday, so there’s a chance that Thursday’s episode will be pre-empted. But in the event the show airs on Thursday, here’s what you can expect.

B&B Spoilers:Thomas Forrester Has Some Explaining To Do

First, off, Thomas Forrester (Matthew Atkinson) will have some serious explaining to do to Hope Logan (Annika Noelle). As B&B viewers know, Thomas revealed himself to Hope as she was lamenting the fact that Thomas was gone forever and that she’d likely go to jail for his death. The two had an emotional embrace, but what’s going to happen now?

The Bold And The Beautiful Spoilers: Ridge Goes Ballistic On Brooke And Hope After Liam Tells Him About Custody Papers

Thomas will need to explain how he survived his ordeal. Clearly, he didn’t fall into acid, so there must have been plain water in the vat. He’ll tell Hope the story, and he’ll also reveal why he decided to wait 24 hours to make his presence known. Chances are, this will have to do with his revenge plot against Brooke Forrester (Katherine Kelly Lang).

Bold And The Beautiful Spoilers: Brooke Forrester Is A Target

It’s likely that Thomas has been present in Brooke’s mansion for some time, and that he overheard Hope and Brooke talking. If that’s the case, then he probably knows that Brooke urged Hope to keep the accident a secret forever, and that Brooke deliberately withheld information about the accident from Ridge Forrester (Thorsten Kaye).

The Bold and the Beautiful spoilers say that Thomas will taunt Brooke in an upcoming episode and essentially force her to confess that she deliberately hid information about his “death” to Ridge. It looks like Thomas will have stayed away after the accident as part of a plot to expose Brooke to Ridge, in order to break up their marriage.

Meanwhile, on Thursday’s new episode of B&B, Shauna Fulton (Denise Richards) will lend her support to Ridge. As B&B viewers know, Ridge has been reeling ever since he found out about Thomas’ indecent proposal to Hope and his disturbing behavior at Forrester Creations. Ridge had hoped that Thomas was improving psychologically, but now he’s worried that his son is truly lost.

The Bold And The Beautiful Spoilers: Hope Tells Liam She Killed Thomas – But Not Until Much Later https://t.co/DkwTmayHgP pic.twitter.com/8b1K8cV5zT

Ridge feels like what’s going on with Thomas is his fault and that he has failed Thomas as a parent, but it looks like Shauna will do her best to convince him that this is not the case. She’ll listen to Ridge, and as he opens up about his concerns, she’ll help him realize that Thomas isn’t lost after all – he’s just going through a difficult time and needs his dad’s support.

The Bold and the Beautiful viewers can also expect to see a little flirting going on between Ridge and Shauna, which shouldn’t come as a big surprise, since these two seem pretty attracted to each other. It will be yet another opportunity for them to bond and for Shauna to be there for Ridge when Brooke can’t be.