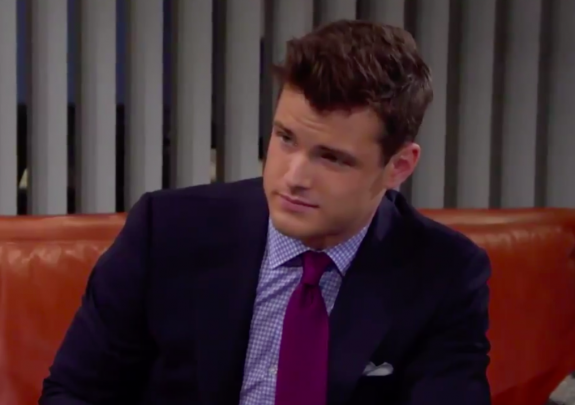 The Young and the Restless spoilers for Friday, November 22, tease that things are getting exciting on the CBS soap. But before we get to that, we should note that the impeachment hearings coverage led to a schedule change. The episode meant for Wednesday has now been bumped to Thursday, so these Y&R spoilers originally meant for Thursday are now set to air in Friday’s episode.

First off, Devon Hamilton (Bryton James) will lament to Elena Dawson (Brytni Sarpy) about how everything got so messed up. Devon will be unsure about whether Colin Atkinson (Tristan Rogers) will be able to be found and whether he’d ever come clean. Elena will offer her support and they’ll discuss Nate Hastings (Sean Dominic) and his favorable outcome at his medical board hearing.

Devon will openly wonder whether Amanda Sinclair (Mishael Morgan) is part of the will scam, and Elena will say that if she is, she’ll get what she deserves. Devon will wish that Neil Winters (Kristoff St. John) were here to offer advice. Elena will think that he’d be proud of Devon.

Next on Y&R, Jill Abbott (Jess Walton) will enter a room in the Maldives and call out for Colin. He’ll appear and ask what took her so long. Jill will be furious and will demand information about the new will pages – whether they’re legitimate and who was really supposed to be Katherine Chancellor’s (Jeanne Cooper) heir. Colin will insist that the will pages are real, and that no one would have believed it if he had just showed up with the pages.

Colin will get amorous with Jill, who will resist his advances. Colin will say that he may have pushed the envelope, but that this all proves his love for her and for Cane Ashby (Daniel Goddard). Jill will slap him, then kiss him.

Next on Y&R, Phyllis Summers (Michelle Stafford) and Nick Newman (Joshua Morrow) will chat at Society. They’ll do some reminiscing and will generally have fun together. They’ll end up playing a video game on their phones and having a great time.

Across the way, Nate will chat with Amanda, who will reveal that she’s not in a relationship; she’s too busy. Nate will remark that he knows from Abby Newman (Melissa Ordway) to listen when someone says that they’re too busy for a relationship. Amanda will say that Devon would reel if they were to date, and Nate will suggest that she stay in Genoa City.

At The Grand Phoenix, Summer Newman (Hunter King) will talk with Theo Vanderway (Tyler Johnson) about his new job in Paris. Jack Abbott (Peter Bergman) will then call him and ask him to stop by the house later. Meanwhile, Nate and Amanda will say goodnight.

Later, at Jabot, Summer will relay to Kyle that Theo accepted Ashley Abbott’s (Eileen Davidson) job offer in Paris. Then Jack, Billy Abbott (Jason Thompson), and Kyle will meet and Billy will tell Kyle that he has resigned. Jack will say that he’s stepping back in as CEO, and that Lauren Baldwin (Tracey E. Bregman) and Kyle will be joint COOs.

Jack will say that Summer also deserves a promotion, so they’ll need someone to head up social media, and that person will be Theo. Kyle will be horrified.

At The Grand Phoenix, Summer and Theo will regroup and Theo will relay that he’s not going to Paris after all and will work at Jabot in Genoa City. She’ll be wary about the thought of him and Kyle working together, while Theo gushes about working alongside her.

Finally, on Friday’s new episode of Y&R, Nick will text Chelsea, who will text back that she’s staying at Adam Newman’s (Mark Grossman) penthouse tonight.