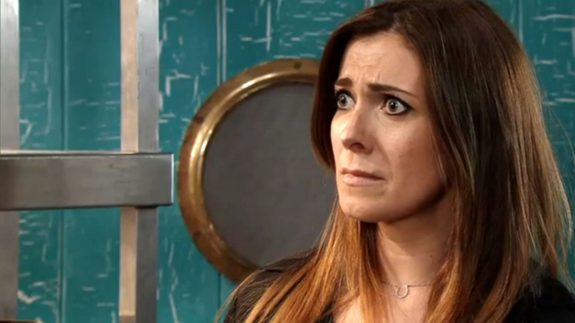 Coronation Street spoilers reveal Robert Preston (Played by Tristan Gemmill) only thinks things are going to be okay between him and Michelle Connor (Kym Marsh). She has a revenge plan in place, even though not everyone thinks it’s a great idea. Will she succeed in taking every penny from her cheating lover?

Corrie spoilers tease that Robert’s cheating game finally was exposed after his car accident. Michelle ended up with a clue after a nurse assumed that she was Robert’s sister and not his fiancee. Then a series of events would follow, including secretly following Robert that led her to discover he had been cheating on her with Vicky Jefferies (Kerri Quinn).

Not only was the young woman pregnant, but also engaged to Robert. Even though the news angered Michelle, she told Robert that things “would be” okay again. Fans suspected she had something up her sleeve, and recent spoilers confirm that fact.

Coronation spoilers from Digital Spy tease that she plans on telling Robert that she will marry him despite his cheating past. He doesn’t seem to suspect anything right now. However, she plans on taking every red cent from him and announcing it at the wedding. However, not everything thinks this is a wise decision on her part.

Adam Barlow (Sam Robertson) knows about Michelle’s plan and has warned her that she needs to reconsider the revenge plot. However, spoilers for next week tease that she will ignore his advice. She plans on moving forward and isn’t going to let anyone get in her way. Will she get what she wants or could this blow up in her face?

What do you think is going to happen with Robert and Michelle on the long-running television show? Will Michelle end up victorious and getting vengeance or could she be biting off more than she can chew? Fans will have to keep watching the popular soap to see what happens next with the characters.