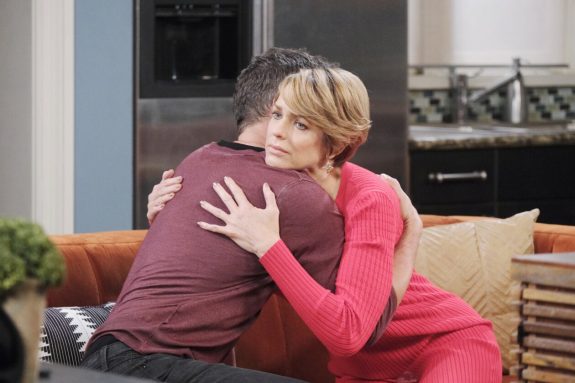 Days of Our Lives (DOOL) spoilers for Friday, November 22, tease that Nicole Walker (Arianne Zucker) will get a special surprise from the love of her life. Eric Brady (Greg Vaughan) plans to pop the question, but he’ll probably mention Mackenzie “Mickey” Horton’s kidnapping first. Sarah Horton (Linsey Godfrey) is going through her worst nightmare right now, so Eric did his best to provide comfort.

Of course, Nicole will be horrified when she gets updates on Mickey’s snatching. The fact that she’s keeping Mickey’s paternity a secret will make matters worse. This news would be even more terrifying for Eric if he knew Mickey was his daughter. Nicole will try to put her guilt aside, especially after Eric whips out a shiny engagement ring. It won’t be long until Eric makes a passionate speech and asks Nicole to marry him.

Days of Our Lives spoilers say Nicole will be stunned over Eric’s big move. He’ll be ready to take this major step forward in their relationship, but can Nicole take it with him? How can she agree to marry Eric when she’s been telling such a huge lie? In the end, Nicole will decide Eric has to hear the truth. She’ll admit Eric is Mickey’s father once Monday hits, so don’t miss the exciting scenes ahead.

However, we should point out that Mickey probably belongs to Kristen DiMera (Stacy Haiduk) and Brady Black (Eric Martsolf). Sarah mentioned the “horrible night” Mickey was born, but she probably doesn’t know the worst of it! There’s a good chance Sarah’s dead baby was switched with Kristen’s perfectly fine one, so that may be a shocker that comes out in the future.

Days Of Our Lives Spoilers: Xander Kiriakis Will Deliver Confession To Salem PD

In the meantime, DOOL spoilers say Xander Kiriakis (Paul Telfer) will arrive at the Salem PD and deliver his confession. Princess Gina Von Amberg is playing the part of Hope Brady (Kristian Alfonso) right now, which could work in Xander’s favor. She won’t be in any hurry to focus on police business, so that could give Xander a shot at destroying his confession after Ciara Brady (Victoria Konefal) fixes this mess.

Finally, Days of Our Lives spoilers say Abigail DiMera (Kate Mansi) will find Eli Grant (Lamon Archey) snooping. She’ll see that Eli’s looking through Chad DiMera’s (Billy Flynn) laptop, so she’ll naturally expect an explanation. There’ll be plenty of suspicions and tension between them, which should continue to drive the drama next week.

Days fans won’t want to miss all the action! We’ll keep you posted as other Days details and rumors emerge. Stick with DOOL and don’t forget to check back often for the latest Days of Our Lives spoilers, rumors, updates and news.