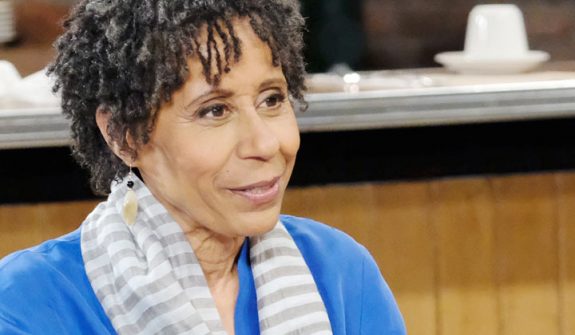 Ned says Monica Quartermaine (Leslie Charleston) is funny about guests. Brook wants to know what is going on. Brook asks Sonny if he’s still driving the ladies wild. Brook gets filled in on Dante’s situation and blames Lulu Spencer ( Emme Rylan) for the divorce. Olivia tells Ned everything that was in the letters. Ned tells Brook they are thrilled to have her there. Ned wants Brook to teach her brother to ride his pony. Sonny laughs at Brook and Olivia arguing.

General Hospital’s Jason Morgan (Steve Burton) goes to speak to Carly Corinthos (Laura Wright) and tells her that Sam McCall (Kelly Monaco) is going to prison for two years. Carly hugs Jason and tells him how sorry she is. Jason will do anything to get her out of there. Jason doesn’t know what to tell the kids. Carly thinks there has to be a way to reduce the sentence. Jason asks what if the sentence sticks. Jason wants to know how to tell the kids their mom will be gone for two years. Carly wants to help Jason figure this out. Jason should have killed Shiloh Archer (Coby Ryan McLaughlin) from the start.

Carly asks if Sam is the one Jason is mad at. Jason says Sam choice this but their kids didn’t. Carly comments on Jason calling the kids “our kids”. Carly tells Jason that the kids won’t remember Drew. Jason says they should have considered the kids before getting involved in this whole thing. Jason said Sam could have weighed the odds better. Jason thinks Sam will listen about riding shotgun now. Carly says the kids need Jason. Carly tells Jason he has to stay clean until Sam gets out of prison. Carly feels for Sam. Sam knows the kids are ok because they have Jason.

General Hospital’s Nikolas Cassadine (Marcus Coloma) tells Jasper Jacks (Ingo Rademacher) that Nina Reeves (Cynthia Watros) is outside. Nina gives Jax a wedding invitation. Nik leaves and goes to the Cassadine estate. Charlotte Cassadine (Scarlett Fernandez) asks who Nik is and why he is there. Jax isn’t happy that Nina is marrying Valentin. Jax refuses to attend the wedding. Nik claims to work for Valentin. Nik says he wasn’t supposed to tell Charlotte. Charlotte wonders why he did. Nina is seeing things clearly for the first time. Nina tells Jax this is her mistake to make.

Jax says working with Nina gave him a chance to get to know her. Jax says Valentin rigged Cassandra Pierce’s (Jessica Tuck) boat to blow up. Jax says Nina wanted him to talk her out of the wedding. Nik tells Charlotte he will be fired if Valentin learns about him. Nik begs Charlotte to keep quiet. Jax tells Nina she is at war with herself. Jax says Nina is smarter than this. Nina calls Jax a condescending jackass. Jax tells Nina it’s her life and her choice. Nina says she plans to destroy Valentin.

General Hospital’s Hamilton Finn (Michael Easton) is wrapping a gift when Harrison Chase (Josh Swickard) joins him. Finn asks Chase how he found out. Chase tells him from Robert Scorpio (Tristan Rogers). Finn apologizes for not telling Chase himself. Chase thinks this is awesome. Chase says Finn should tell their father he’s a grandfather. Chase can’t wait to meet his niece. Finn thanks Chase for being on board with all this. Finn isn’t sure Anna feels the same.

Finn tells Chase about Anna’s return. Finn asked how he got here. Finn is engaged, has a daughter and a brother. Finn is terrified of messing up his family. Finn tells Chase about the tea party and shows him pictures of his daughter. Chase says fatherhood looks good on Finn. Finn gives Chase evidence on Alexis Davis’ (Nancy Lee Grahn) poisoning. Chase wants to meet his niece soon.

General Hospital’s Anna Devane (Finola Hughes) and Hayden Barnes (Rebecca Budig) meet to clear the air. Anna asks why Hayden would think she and Finn aren’t getting married. Hayden says because of the separation. Anna tells Hayden she robbed both Finn and their daughter of time together.

Hayden brings up Anna’s daughter. Anna tells Hayden she couldn’t have her child near her. Anna asked why Hayden showed up now. Anna is happy that Finn knows about his daughter. Anna wants Hayden to be honest about rebuilding a relationship with Finn. Anna welcomes Finn’s child into their life.

General Hospital’s Curtis Ashford (Donnell Turner) tells Jordan Ashford (Briana Nicole Henry) that he needs to tell Nina the truth but has no proof. Jordan says Nina needs to figure this out for herself. Jordan thinks facing the truth isn’t worth losing him. Stella Henry (Vernee Watson) returns home. Stella is going back out of town. Curtis wants to honeymoon in London. Stella tries to discourage that idea. Stella plans to track T.J. Ashford (Tajh Bellows) down to get answers.