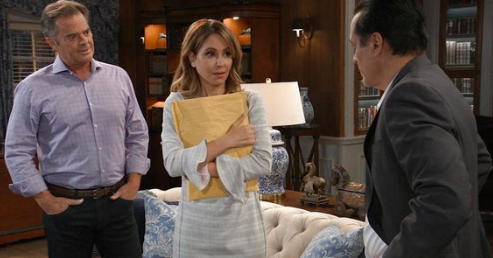 However, Anna will eventually turn Jason’s attention to a mystery she needs help with. What’s this all about? There’s no word on that yet, but we do know Anna will remain wary of Hayden Barnes (Rebecca Budig). She may want Jason’s help figuring out what Hayden’s up to.

Of course, Hayden’s up to a lot – and Valentin Cassadine (James Patrick Stuart) knows it! He just called Hayden over to Wyndemere, where he’ll make a proposition on Friday. Their conversation will take a tense turn as Valentin becomes threatening. He’ll make it clear that he could make things quite unpleasant for Hayden.

Hayden will seem nervous as she suggests that “once it clears,” she’ll tell Valentin everything she knows about the portrait. He may doubt that, especially if this potential deal doesn’t work out. Whatever the case, Hayden will nearly be abducted within the next couple episode. Valentin will be suspected of sending someone to snatch her, so Hayden will realize she’s in grave danger.

Over with Jasper “Jax” Jacks (Ingo Rademacher), he’ll grill Nina Reeves (Cynthia Watros) about her plan. Nina’s plotting Valentin’s destruction, but Jax will have questions about this elaborate charade. He may wonder why Nina would bother when she could just break Valentin’s heart now. Nina might contend that heartbreak isn’t enough for her now. She wants to humiliate Valentin and truly bring him to his knees, but we’ll see how long she sticks to her goal.

To make matters worse, Sonny will start ranting about Jax and the threat he poses. It seems he’ll fear Jax will turn him in over the Dev Cerci (Ashton Arbab) situation – at least if he does something to rile Jax. GH fans know Jax is far more worried about hiding Nik right now, so Sonny’s working himself into a frenzy when there’s no need.

GH Spoilers: Mike Corbin Will Get A Visit From Stella Henry

Other General Hospital spoilers say Mike Corbin (Max Gail) will get a visit from Stella Henry (Vernee Watson). Sadly, it doesn’t look like Mike will recognize Stella. He’ll tell her nobody’s going to see him around this place again and share his plan to take off. Mike obviously isn’t going somewhere, but it appears his mind will be stuck in the past. His decline will be heartbreaking, but Stella will still feel obligated to share the change she’s seen in Mike.

Sonny and Carly will get updates soon, so they’ll have to deal with this crushing news together. We’ll keep you posted as other GH details and rumors emerge. Stay tuned to the ABC soap and don’t forget to check back often for the latest General Hospital spoilers, rumors, updates and news.