The Bold and the Beautiful Spoilers: Friday, November 22 – Thomas Has A Point To Prove – Ridge Laments To Shauna About Thomas 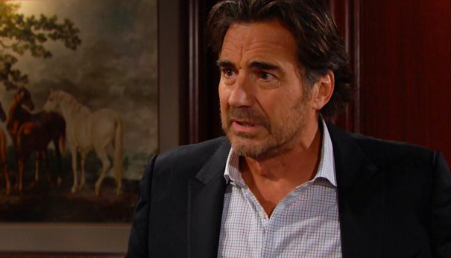 The Bold and the Beautiful spoilers for Friday, November 22, tease that Thomas Forrester (Matthew Atkinson) will have a point to prove. As B&B viewers know, Thomas has just made himself known to Hope Logan (Annika Noelle). Hope was lamenting the fact that Thomas was dead and that she was likely going to go to prison for killing him, when he emerged through the door of her room.

Bold And The Beautiful Spoilers: Ridge Begs Steffy To Be A Better Parent Than He Was

But what point does Thomas want to prove? Well, given that he’s emerged from the shadows on the grounds of Brooke Forrester’s (Katherine Kelly Lang) mansion, it’s likely that Thomas has been eavesdropping on Hope from within the mansion. And if that’s the case, then he would know all about Brooke urging Hope to cover up his “death” from the fall into the acid.

That will, of course, leave Thomas angry with Brooke. But he’ll probably also have heard Hope tell Brooke that she was going to come forward with the truth and that she wouldn’t lie about what happened, despite the consequences. Thomas may have found himself feeling endeared toward Hope, and so the point he wants to prove might be that he and Hope need each other.

Bold And The Beautiful Spoilers: Will Hope Logan & Thomas Forrester Call A Truce?

Of course, B&B viewers know that Hope’s heart is with Liam Spencer (Scott Clifton), but Thomas has long wanted Hope to be a mother to Douglas Forrester (Henry Joseph Samiri). Perhaps he’ll think that he and Hope should call a truce and hit the reset button on their relationship. Given that ongoing B&B spoilers say that Hope and Thomas will tell Douglas together that she’s his new mother, it seems that they may reach an understanding.

Meanwhile, on Friday’s new episode of B&B, Ridge Forrester (Thorsten Kaye) will tell Shauna Fulton (Denise Richards) that he may not have lost Thomas after all. As B&B viewers know, Ridge has received a lot of support from Shauna in the past several weeks. She’s been there for him when Brooke has not, and it looks like he’ll go to her once again with details about the problems he’s having.

The Bold and the Beautiful spoilers indicate that viewers can expect Shauna to patiently listen to Ridge and he laments about his family, in particular Thomas, and about the state of his marriage to Brooke. There will also be a bit of flirting going on per usual, which shouldn’t come as a big surprise, given how much chemistry Shauna and Ridge have.

According to B&B spoilers, Ridge will confide in Shauna that he fears he has lost Thomas forever. Of course, he won’t know about how close Thomas came to losing his life during his dangerous encounter with Hope; rather he’ll be talking about Thomas having lost his way in life. It looks like Shauna will reassure Ridge and make him see that things may be bad with Thomas now, but that the situation is temporary.