‘The Bold and the Beautiful’ Spoilers: Thomas Threatens Brooke – She Fears Hope Will Be Jailed 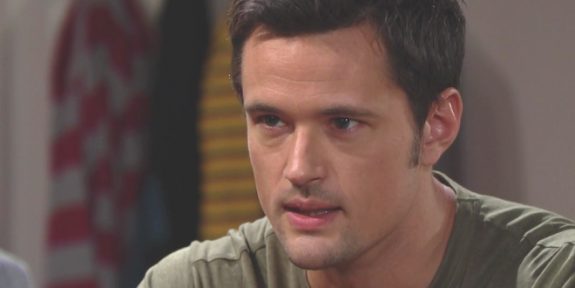 Thomas Forrester (Matthew Atkinson) is alive on ‘The Bold and the Beautiful’. That’s not a surprise to soap fans. But it was to Hope Logan (Annika Noelle), who warmly welcomed him back with great relief.

Brooke Logan Forrester (Katherine Kelly Lang) has a different reaction to Thomas having cheated death. His miraculous survival, after having fallen into a vat of hydrofluoric acid, continues what Brooke sees as a dysfunctional dynamic.

Now, armed with the truth, Thomas threatens Brooke to tell Ridge Forrester (Thorsten Kaye) what really happened between him and Hope in Forrester Creations’ storage room.

Bold And The Beautiful Spoilers – Return From New York Changed Nothing

Brooke was leery of Thomas since he returned with Douglas Forrester (Henry Joseph Samiri) from New York, following Caroline Spencer’s (Linsey Godfrey) untimely death. Her instincts bore a full harvest of daytime fruit in the months that followed.

Thomas’ history of mental instability was coupled with his inability to develop single-parenting skills. He did have his moments, but generally reverted to selfish pursuits, including his obsession with Brooke’s daughter.

What was incredible, yet believable, was that Thomas was still using Douglas as a bargaining chip. Atkinson’s diabolical character still isn’t above using his son in trade for some type of connection to Hope.

The first chase of Hope wasn’t inside FC, but instead took place shortly after the Beth Spencer (Madeline Valdez and River Davidson) reveal. Hope was frightened when Thomas appeared out of nowhere at Steffy Forrester’s (Jacqueline MacInnes Wood) home, so she ran toward the cliff as Thomas followed.

She misinterpreted his apology while Brooke approached from behind. Lang’s iconic character stepped between ‘Thope’ and laid her hands on Thomas, in an effort to create some space between him and Hope.

In shape, but surely unsteady on his feet, Thomas fell more than one hundred feet down onto the sand below. Later, while recovering in the hospital, he knew he’d actually gained leverage and said that he wouldn’t be reporting the matter to the authorities.

The Bold and the Beautiful POLL: How Did Thomas Cheat Death This Time? @celebratesoaps #bb #BoldandBeautiful

Thomas despises Brooke, but actually does care about Hope in his own fixated way. So, he’s not primed to want to report what Hope did.

In this new scenario, Thomas comes to learn that the real story of what happened was withheld from his dad, at Hope’s insistence. Knowing that ‘Bridge’ is unstable, Thomas uses the situation to threaten Brooke into backing off.

Brooke knows that, for the moment, Thomas has her over the cliff. The above lengthens what has already been a very dramatic arc that’s included many soapy twists and engaging turns.