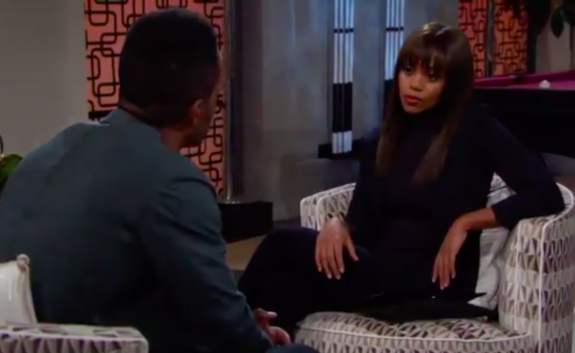 The Young and the Restless spoilers for Friday, November 22, tease that Jill Abbott (Jess Walton) will burst into a hotel room in the Maldives and call out for Colin Atkinson (Tristan Rogers). He’ll materialize from the balcony and ask what took her so long, and Jill will be furious to realize that he lured her there.

Jill will ask about whether the new will pages are legitimate or not, and who was really supposed to be Katherine Chancellor’s (Jeanne Cooper) heir – Devon Hamilton (Bryton James) or Cane Ashby (Daniel Goddard). Colin will swear that the will pages are real. He’ll go on to say that he had to arrange things in the way that he did, because no one would have believed it if he had showed up with the pages himself.

Jill will also want to know how he found out about the new will pages, but Colin won’t name names. He’ll then try to make moves on Jill, but she’ll resist. Colin will admit to going about things in a non-straightforward way, but that this all proves his love for her and Cane. Jill will be furious and slap him, then kiss him passionately.

Next on Y&R, at his penthouse, Devon will cancel all his appointments for the day, complaining to Elena Dawson (Brytni Sarpy) about how everything is so messed up. He’ll go on about Colin and how he went and accused Tucker McCall (Stephen Nichols) of fraud. Elena will offer her support and she’ll get Devon to count his blessings and realize all the good things he has left in his life, which is a lot. Devon will wonder what Neil Winters (Kristoff St. John) would say about all of this. Elena will think that he’d be proud of Devon.

Meanwhile, Phyllis Summers (Michelle Stafford) and Nick Newman (Joshua Morrow) will commiserate with each other at Society. They’ll agree not to talk about family or Chelsea Lawson (Melissa Claire Egan) and will end up playing video games on their phones and relieving stress. Later, at home, Nick will text Chelsea, who will text back that she’s staying at Adam Newman’s (Mark Grossman) penthouse tonight.

Next on Y&R, Nate Hastings (Sean Dominic) and Amanda Sinclair (Mishael Morgan) will enjoy dinner together at Society. They’ll have good chemistry together and will even flirt a little bit, and they’ll establish that neither of them is in a relationship. They’ll both profess to being too busy for such things. Amanda will muse that Devon would flip out if they were to date. They’ll eventually part with a friendly hug, and Amanda will head to some bar where she’ll listen to music and drink alone.

Next on Y&R, Summer Newman (Hunter King) will congratulate Theo Vanderway (Tyler Johnson) about his new job in Paris. She’ll be genuinely happy for him, and he’ll note that he hasn’t told Jack Abbott (Peter Bergman) yet. Jack will call him and invite him to the house, and once there, Jack will ask Theo if he’d consider staying in Genoa City and taking a position at Jabot.

The Young and the Restless Spoilers: Adam Now Back With Chelsea – Sharon Was Just A Fallback Option? https://t.co/O5zufpCOCK pic.twitter.com/dxjnn6hWFX

Theo will initially say that he thought the Paris job would be a good change for him, but Jack will entice him with the prospect of running the social media department at Jabot. Theo will like the idea, and Jack will immediately get on the phone and call the executive team together.

Young And The Restless Spoilers: Kyle Abbott Gets A Shock

Next on Y&R, Summer will tell Kyle that Theo accepted Ashley Abbott’s (Eileen Davidson) job offer in Paris. That will be welcome news for Kyle. But then later, Jack and Billy Abbott (Jason Thompson) will arrive at Jabot to give Kyle some news. First, Billy will tell Kyle that he’s resigned, effective immediately. Kyle will think that means that he’ll be sole CEO and he’ll be thrilled.

But then Jack will step in and say that he’s coming back as CEO and that Lauren Baldwin (Tracey E. Bregman) and Kyle will be joint COOs. Kyle won’t know quite what to do with that information, and he’ll be irked at first, but Jack will talk him down. Then Jack will say that Summer is going to be promoted to head of marketing, and that Theo will take her old job. Kyle will be stunned.