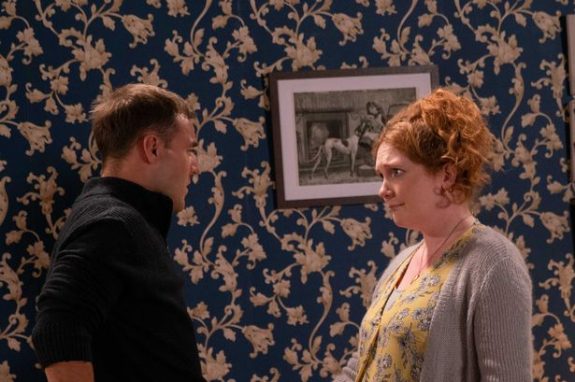 In “Coronation Street,” the world of Fiz Stape (Jennie McAlpine) and Tyrone Dobbs (Alan Halsall) will turn upside down as the soap lines up a shocking New Year storyline for them. In a report by The Sun, it seems like newcomer Jade Rowan (Lottie Henshall) will be the cause of their troubles after the later reports the pair to social services.

Nanny Jade will finally show her true colors and will wreak havoc in the lives of Fiz and Tyrone. According to a TV insider, “The couple will be completely blindsided by having their children taken off them and at a loss as to how it could have happened.”

What the couple didn’t know is that Jade reported them to social services for allegedly abusing Hope Stape (Isabella Flanagan) and Tyrone’s daughter, Ruby. An investigation will be carried out and while it’s underway, their kids will be taken away from the couple.

A Devastating New Year For Fiz and Tyrone

Fiz and Tyrone won’t be having a happy New Year. They will be left bewildered as to what happened to their family. Meanwhile, after causing trouble, Jade will disappear but Tyrone’s gran, Evelyn Plummer (Maureen Lipman) will track her down.

As expected of any mother, Fiz wants to confront Jade. However, Tyrone cautions Evelyn that if she does something rash, they may never be able to get their kids back from social services. It seems like Jade has a secret grudge against the couple and viewers need to stay tuned to find out what it is.

McAlpine Speaks Up About Jade Mystery

In an earlier interview, Jennie McAlpine talked about the Jade Rowan mystery. Viewers know that Jade arrived in the cobbles to help Fiz’s troubled daughter, Hope. She’s been showing suspicious behavior in the past few weeks, which means it quite obvious that she has an ulterior motive.

McAlpine said, “Fiz really likes Jade. After all, she brought Jade to Weatherfield to help with Hope.”

“Fiz wants Hope to be okay, so she is happy that Hope responds to Jade, but she is gutted that Hope listens to Jade and not to her,” she continued.

“It makes Fiz feel totally useless as a mother. Jade seems to have a great relationship with Hope and she can control Hope in a way that Fiz can’t,” she explained.

Next week, Fiz and Tyrone will let Jade go. They’ll say her services are no longer required because they managed to enroll Hope back into Bessie Street School. Fiz will have concerns about letting Jade go and it seems like the latter won’t like the news either.