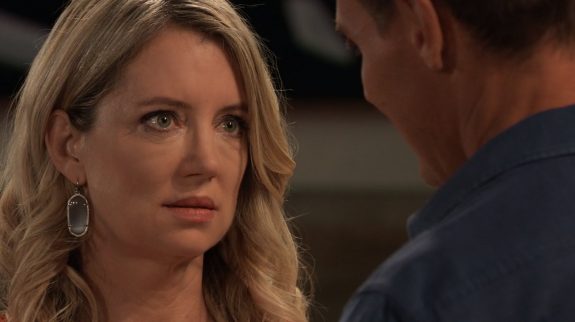 Carly tries to change the subject. Carly wonders if there is anything Sonny can do to help. Sonny asks if Carly told Jason what she is keeping from him. Sonny tells Carly that Jacks loves Jocelyn Jacks (Eden McCoy) but he’s using this situation. Sonny says when Jax finds something he can use against him he will. Carly says Jax isn’t as vindictive as he is. Sonny says Carly put this in motion. Carly says Sonny slept with her lawyer. The phone rings, Stella Henry (Vernee Watson) is there. Stella tells Sonny and Carly about Mike’s condition.

General Hospital’s Stella visits Mike Corbin (Max Gail) who doesn’t recognize her. Mike wants a drink, Stella pretends to get it. Stella brings Mike water and tells him there is no scotch at the bar. Mike says his supervisor won’t like it if he shows up drunk. Mike needs to show his girls father he can hold a job. Mike talks about Sonny’s mother. Mike talks about gambling. Mike tells Stella everything he wants from his life.

General Hospital’s Hamilton Finn (Michael Easton) calls Anna Devane (Finola Hughes) and tells her he will be late. Anna is with Jason Morgan (Steve Burton). Anna wants to know how Jason showed up on the pier. Jason says Valentin didn’t seem guilty, Nina is the one who got upset. Jason says Valentin kicked him out after a phone call. Jason assumed the call was from Cassandra Pierce (Jessica Tuck). Jason tells Anna she knows the rest. Anna assumes that Valentin provided the boat and got rid of Cassandra. Jason tells Anna that Sam McCall (Kelly Monaco) was sentenced to two years in prison. Anna asks if the kids know. Anna offers Jason advice on talking to the kids about Sam.

Jason goes to speak to Danny Morgan (Porter Fasullo). Monica Quartermaine (Leslie Charleston) offers to let the kids stay there with her. Meanwhile, Finn joins Anna and they discuss Sam’s situation. Anna tells Finn about her meeting earlier. Finn isn’t sure he can forget everything that has happened. Jason doesn’t know if he wants to take the kids out of their home. Monica says the kids will have consistency. Jason promises to talk to Sam about this. Monica tells Jason to stay out of trouble. Jason tells Danny what is going on with his mom. Danny wants to stay at Monica’s.

General Hospital’s Nina Reeves (Cynthia Watros) tells Jax she planned to play Valentin Cassadine (James Patrick Stuart). Jax knew she was too smart to fall for Valentin’s lies. Nina almost had Jax convinced that she believed Valentin. Jax saw how much pain Nina was in that night. Nina doesn’t remember half of what she said that night. Nina says Jax deserves a medal. Jax says it didn’t add up that Nina was that gullible. Nina tells Jax what her plans were. Jax says that is the wrong plan for the situation. Jax says revenge doesn’t always help. Jax says living will is the best revenge.

Nina says he decided to play Valentin’s game until last night. Nina says she is a family with Valentin and his daughter. Jax tells her not to say Valentin is a good father. Jax says Sonny is a good father too but one of Carly’s kids is dead. Nina says this isn’t Jax’s decision to make. Jax says you can’t live someone’s life for them, he can only offer a better alternative. Nina picks up her wedding invitation and tells him not to forget to RSVP. Nina leaves.

Hayden says they have a deal. Hayden wants the money upfront, Valentin refuses. Charlotte Cassadine (Scarlett Fernandez) interrupts and wants to read her book. Valentin walks Hayden out and Nik exits through the tunnels. Nik returns to Jax’s who says he’s done with the lying. Nina help read to Charlotte as Nik tries to call Hayden.

Only time will tell, but stay tuned to General Hosptial, airing weekdays on ABC. And don’t forget to check back here regularly for all your General Hospital news, information and spoilers?