General Hospital Spoilers: Cameron Presses Dev About His True Identity- Will Learning This Put The Teens In Peril? 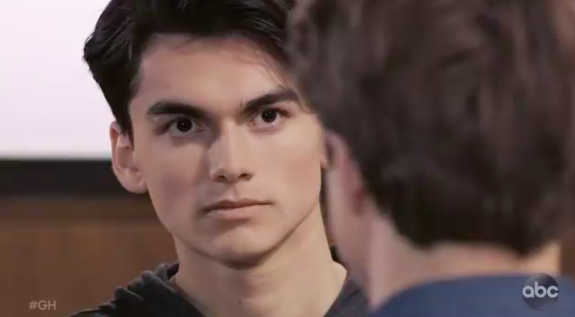 General Hospital (GH) spoilers tease that Dev Corbin (Ashton Arbab) will soon let it slip to Cameron Webber (William Upton) and Trina Robinson (Sydney Mikayla) that he isn’t really Sonny Corinthos’ (Maurice Bernard) cousin. This will come as a shock to the two, so they will want answers. If Josslyn Jacks (Eden McCoy) isn’t around to smooth things over, Dev may reveal the truth.

GH Spoilers: The Deception Could Get Sonny Corinthos In Legal Trouble

Dev will try to evade the questions, because if the truth comes out about how Sonny had documents forged along with a fake background, after Dev sought him out. Dev and Sonny first met in Turkey, and Dev was instrumental in helping Sonny and Robert Scorpio (Tristan Rogers) free Dante Falconeri (Dominic Zomprogna) from his undercover mission. But Dev’s help came at a cost to the teen.

If Dev is deported back to Turkey, his life would be in grave danger. The criminal organization that Dante was trying to bring down will now want to kill Dev for his role in freeing Dante. However, it’s also possible that this organization could come after Dev if he surfaces in the United States. So Dev won’t want to say anything, even to Cameron and Trina. If one of them lets something slip, it could bring danger to all of them.

If his enemies do find Dev, they won’t think twice about using his friends to get to him, perhaps even as hostages. Hopefully if Dev is forced to come clean to Cameron and Trina, they will understand how serious it is. But it will still be a dangerous situation for all involved.

Will Dev reveal the truth to Cameron and Trina? Will legal troubles follow or will this put Dev and his friends in danger? Only time will tell, but stay tuned to General Hospital airing weekdays on ABC. And don’t forget to check back here regularly for all your General Hospital news, information and spoilers!