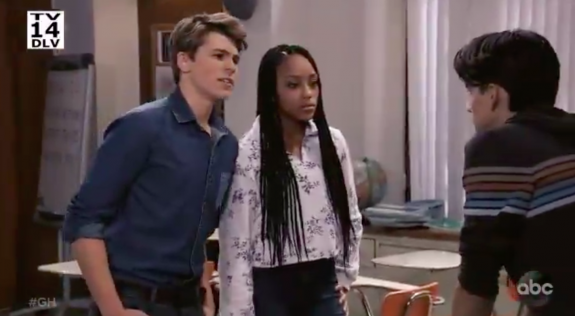 General Hospital (GH) spoilers for Monday, November 25, tease that Stella Henry (Vernee Watson) is in for a shock. She’ll be taken aback when T.J. Ashford (Tajh Bellow) reveals he’s going to ask Molly Lansing-Davis (Haley Pullos) to marry him. Stella will surely have a few words of wisdom to pass along in classic Stella fashion. Of course, it’s Alexis Davis (Nancy Lee Grahn) that T.J. really needs to talk to.

GH Spoilers: Stella Henry Is In For A Shock

T.J. will do just that at some point on Monday. He’ll ask for Alexis’ blessing, and it seems likely she’ll gladly give it. Alexis likes T.J. and he recently uncovered her mystery diagnosis. There’s no reason for Alexis to stand in Molly and T.J.’s way, so she’ll undoubtedly wish T.J. luck in his proposal.

General Hospital Spoilers: Valentin asks Ava for the portrait? Will she betray Nikolas and his family a second time?

As for Neil Byrne (Joe Flanigan), he’ll be curious about the culprit behind Alexis’ poisoning. Neil will settle on Kendra Lennon (Michelle Argyris) as a possible suspect, so he’ll start grilling Alexis about what exactly they work on together. After Alexis spills about her fitness regime, Neil will admit he thinks Kendra’s out to get her. Naturally, Alexis will have doubts. She just won’t see any motive Kendra might have to harm her.

That’s because Alexis doesn’t know Kendra is linked to Kiefer Bauer (Christian Alexander) – at least not yet. GH fans can expect that bombshell soon though, so don’t miss the trail that leads to Kendra’s exposure. In the meantime, let’s talk about a different bombshell. “Drew Cain” aka Franco Baldwin (Roger Howarth) has decided to have the memory reversal procedure after all, so he’ll break the news to Monica Quartermaine (Leslie Charleson) on Monday.

Although this will be a tough blow for Monica, she should understand why “Drew” reached this decision. Monica may suggest she’s proud of “Drew” for stepping aside and letting Franco reclaim the life that belongs to him. As for Julian Jerome (William deVry), he’ll be confused about “Drew’s” change of heart. Elizabeth Baldwin (Rebecca Herbst) will suggest there’s a lot Julian doesn’t know about Franco, but she’ll avoid going into too much detail.

Nevertheless, Liz will at least convey that “Drew” has good reasons for doing what he’s doing. She’ll be hopeful that the procedure will work, but there are no guarantees. At school, Dev Cerci (Ashton Arbab) will face questions from his friends. Trina Robinson (Sidney Mikayla) will get a clue that puts Dev’s identity at risk. She’ll want to know if Dev is Sonny Corinthos’ (Maurice Benard) cousin or not.

Cameron Webber (William Lipton) will eventually realize Dev isn’t a cousin like he claimed to be, so he’ll want some answers. He’ll put Dev on the hot seat and try to figure out who the heck this guy is. Josslyn Jacks (Eden McCoy) will hopefully step up to defend Dev’s deception and smooth things over.

Other General Hospital spoilers say Carly Corinthos (Laura Wright) will be heartbroken. Sonny will meet with Mike Corbin (Max Gail) first and won’t tell Carly how bad the situation is. Stella already alluded to it, but it’ll be different for Carly to see it first-hand. She’ll wonder why Sonny didn’t tell her what was going on with Mike, so trust issues will once again plague this couple.

General Hospital has another great episode coming up, so stay tuned. We’ll give you updates as other GH news and rumors emerge. Stick with the ABC soap and don’t forget to check back often for the latest General Hospital spoilers, rumors, updates and news.