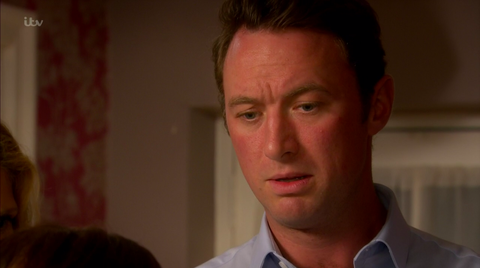 In “Emmerdale,” Liam Cavanagh (Jonny McPherson) was arrested for suspicion of assault after he attacked Jacob Gallagher (Joe-Warren Plant) following a heated confrontation between the two.

It all started when Liam found out that Jacob slept with his teen daughter Leanna Cavanagh (Mimi Slinger) and rejected her after. After throwing up in front of her dad, the embarrassed teen admitted that she’d taken the morning after pill and told her what happened after they had sex.

Emmerdale Spoilers: Lydia Faces the Past, Leyla Struggles, Charity Puts Her Foot Down

Leanna said Jacob wasn’t interested in her and that he did it so he would feel better. Liam then asked if she didn’t want to have sex with him and if he forced her to do it. She and Bernice Blackstock (Samantha Giles) insisted that wasn’t the case but Liam didn’t listen. He immediately went to confront Jacob and accused him of taking advantage of her daughter.

Unfortunately, Jacob showed no signs of remorse for what he did. He even made nasty comments about Leanna.

He added, “It’s just sex. People do it all the time, it doesn’t mean anything. That’s why I left afterward. She wanted it more than me, I wasn’t even that bothered.”

Liam told him that he can’t just have sex with someone and think that it’s nothing. “You should have had more respect,” Liam shot back. Jacob continued to lash out and it pushed Liam to his limits. He attacked Jacob and was ordered to leave the shop.

Liam wasn’t the only one who had something to say at Jacob. David Metcalfe (Matthew Wolfenden) and Leyla Harding (Roxy Shahidi) told Jacob that his behavior was disgusting and that he can’t treat people that way.

Emmerdale Spoilers: The Troubled Teen Reports Liam To The Police

But the troubled teen had something else in mind as well. He said Liam can’t hit him and expect to get away with it either. So he called the cops on Liam and they went to his house to arrest the latter.

Matthew Wolfenden revealed a few of the things that viewers can expect after Liam’s assault on Jacob. He hinted that David and Leyla will manage to talk Jacob down and withdraw the charges. They’ll explain what will happen to Liam and how he’s suffered for what Maya did. The actor added that Jacob will patch things up with Liam and Leanna.

Be sure to tune in to catch up on everything happening on the soap right now. Come back here often for the latest in Emmerdale spoilers, updates, news and rumors! news and updates!