The Bold and the Beautiful Spoilers: Monday, November 25 – Brooke Stunned To See Thomas Alive – Thomas Taunts Her To Come Clean To Ridge 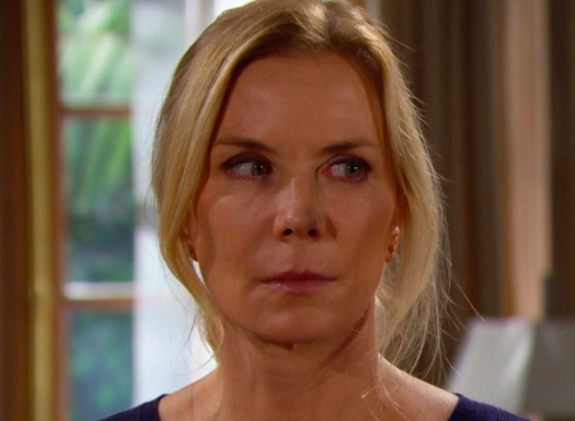 The Bold and the Beautiful spoilers for Monday, November 25, tease that Brooke Forrester (Katherine Kelly Lang) will prepare herself to give Ridge Forrester (Thorsten Kaye) some horrible news. As B&B viewers know, she is under the belief that Thomas Forrester (Matthew Atkinson) fell to his death at Forrester Creations after Hope Logan (Annika Noelle) accidentally pushed him into a vat of hydrofluoric acid.

Of course, Thomas didn’t really die, and he’s just revealed himself to Hope, but Brooke knows nothing about that big reveal. As B&B viewers know, Brooke had urged Hope to keep Thomas’ alleged death a secret. Since Hope had pushed Thomas before he fell into the vat, Brooke was scared that Hope could be accused of murder, even though the whole thing was an accident. Brooke even stopped Hope from telling Ridge about Thomas’ fate.

‘The Bold and the Beautiful’ Spoilers: Ridge Hears Half The Story – Marriage Nears Shatter Point

But on Monday’s B&B episode, Brooke will find herself prepared to tell Ridge the whole story about the accident. She’ll head to the Forrester mansion to see Ridge and she’ll be prepared to tell him that his son is dead. But before she’s able to say anything to Ridge, it looks like Thomas will show up at the mansion.

B&B viewers should be prepared for a big reveal when Brooke sees Thomas. She’s going to be shocked to see him alive and well, and she’ll be horrified as Thomas taunts her about the secret she kept from Ridge. Thomas will needle Brooke to come clean with Ridge, and he’ll have her right where he wants her. Thomas is always looking for a way to cause problems in “Bridge’s” marriage, and B&B viewers can expect him to use the opportunity he’s been given.

Bold And The Beautiful Spoilers: Thomas Forrester Gets The Upper Hand

Brooke’s shock over seeing Thomas will probably quickly turn to anger as she realizes that he stayed away for a full 24 hours and allowed Hope to think that she killed him. But unfortunately for Brooke, she’s not going to have much moral high ground, given that she also kept a major secret from Ridge.

Ridge will surely wonder what’s going on as he listens to Thomas taunt Brooke about coming clean and then sees Brooke’s reaction to the whole thing. And he’ll be completely unprepared to hear Brooke’s big confession. It looks like he’ll be totally blindsided to learn that Brooke kept his son’s “death” from him, and ongoing spoilers indicate that Ridge will ultimately leave Brooke over it.

The Bold and the Beautiful Spoilers: Liam Stunned To Learn The Truth About Hope’s Encounter With Thomas https://t.co/8OFs0FysAR pic.twitter.com/BXuJP1oPBH

Other B&B spoilers indicate that Ridge will also get comfort from Shauna Fulton (Denise Richards) on Monday’s episode, and that she’ll be a source of support for Ridge when Brooke is not. Whether that means that Shauna will be there when everything goes down with Thomas and Brooke remains to be seen, but it’s probably pretty likely that Shauna will have gone back to the guesthouse by that time.

So, Shauna may offer Ridge moral support before Brooke arrives on the scene. Shauna has been very effective in getting Ridge to put things into perspective and actually smiling every once in a while. Perhaps she’ll offer him some words of encouragement in advance of what will become a big showdown with Brooke – it looks like he’ll need it!