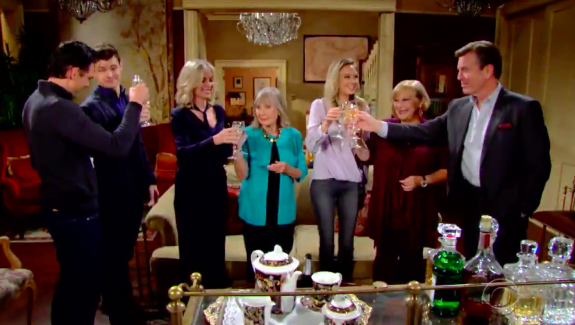 The Young and the Restless spoilers for Monday, November 25, tease that Jack Abbott (Peter Bergman) and Traci Abbott (Beth Maitland) will talk at the Abbott estate. Ashley Abbott (Eileen Davidson) will be on her way having arrived early, and Traci will ask Jack to give the completed Abbott family memoir a read. After Traci leaves, Jack will start with the preface, which is about the memoir being a labor of love.

Next on Y&R, Jack will read about John Abbott (Jerry Douglas), and how he vowed to be the best father he could be after his marriage to Dina Abbott Mergeron (Marla Adams) ended. Jack will then flash back to telling John that he’s returning to Jabot. Jack will continue reading about Dina coming back throughout the years and will flash to one of her visits, during which she wanted to remarry John and be a mother to him again.

Jack will also read about John’s devotion to his family, and he’ll flash back to the time that he promised his father, who was in the hospital, that he’d look out for the family. He’ll also remember Dina saying that she loved him after her Alzheimer’s diagnosis.

Young And The Restless Spoilers: The Memoir Addresses The Abbott-Newman Rivalry

Next on Y&R, Jack will read about the various clashes between himself and Victor over the years, and about how the Abbott and Newman families are intertwined. He’ll flash back to several scenes with Victor from the past, including when Victor had a heart attack during an argument, and when he threw a chair through a window during one of their clashes. The memoir will note that the two have mellowed toward each other in recent times.

Next on Y&R, the memoir will address romance, and Jack will have several flashbacks, including proposing to Nikki Newman (Melody Thomas Scott) and flirting with Phyllis Summers (Michelle Stafford). He’ll also flash to some difficult memories, including when he and Nikki lost their baby, and when Phyllis had cheated with Nick Newman (Joshua Morrow).

Y&R Spoilers: The Abbotts Come Together To Celebrate

Next on Y&R, Traci, Ashley, and Billy Abbott (Jason Thompson) will arrive, and Jack will remark that he’s been mesmerized by the book. Traci will tell him to read some more, and he’ll recall giving Kyle Abbott (Michael Mealor) his grandfather’s cufflinks. He’ll read that the Abbotts always know that there’s a way back to each other, as he flashes to more poignant scenes of clashes between the Abbott siblings.

Jack will read the final words of the book aloud for all to hear: “Thus our story will live on, not just in these pages, but in our traditions, our memories, and our hearts.” Everyone will be teary-eyed and they’ll decide that a celebration is in order.

‘The Young and the Restless’ Spoilers: Chabs Teased As Next Super Couple – Chance Brushes Phyllis Off https://t.co/m7iOVVzOfO pic.twitter.com/JdVzCaef9a

Young And The Restless Spoilers: Jack Abbott Will Tell His Family They All Are A Part Of Him

Kyle, Dina, and Abby Newman (Melissa Ordway) will then join them, and Jack will note Traci’s dedication and creativity in authoring the book. Everyone will applaud Traci, and Traci will have everyone applaud Jack as well. Jack will be in tears and say that he’s learned so much from this experience.

Jack will then note to everyone that they are all a part of him, a part of who he is, and he’ll say that he’s grateful for every moment in the past and every moment ahead. He’ll offer a toast to all of the Abbotts – those to come and those in the past. Finally, on Monday’s episode of Y&R, Jack will get choked up as everyone toasts to the family.