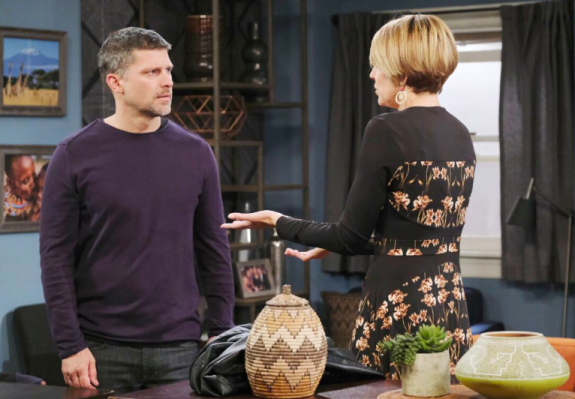 Eric Brady (Greg Vaughan) will be stunned by Nicole Walker’s (Arianne Zucker) revelation that he, not Xander Kiriakis (Paul Telfer) is the birth father of Sarah Horton’s (Linsey Godfrey) baby, Mackenzie Horton (the May twins). Xander will insist that he is the baby’s father and he loves her, while an angry Eric will confront Xander and Sarah and want to know where his daughter is!

Days Of Our Lives Spoilers: Stefano DiMera Revealed – Or Not?

The big reveal of Stefano DiMera (last played by the late Joseph Mascolo) will take place this week – or will it? Chad DiMera (Billy Flynn) will go to a room in the Salem Inn that the man who he thinks is his father agrees to meet him, and in the room, which is dark, only the silhouette of a man with his back to Chad stands. His meeting with his father won’t go quite as he expected. Princess Gina (Kristian Alfonso) will finally finish her new portrait of the Phoenix, and Dr. Marlena Evans (Deidre Hall) will receive a gift form a secret admirer; could it be Stefano?

Days of Our Lives viewers will recall from last week’s episodes that Ciara Brady (Victoria Konefal) took matters into her own hands when Ben Weston (Robert Scott Wilson) called her from prison and told her that his father, Clyde Weston (James Read) had tried to help him out by kidnapping Baby Mickey as leverage, and sent texts to Xander instructing him to write out a full confession of his and likely Victor Kiriakis’ (John Aniston) part in the murder of Jordan Ridgeway (Chrishell Hartley) and delivering it to the Salem Police Station. Xander did; and this week he will try to destroy his confession as Ciara takes on Clyde’s goon and apparently is successful rescuing the baby and bringing her back home!

Days Of Our Lives Spoilers: The Battle Of The DiMeras; Chad DiMera Versus Gabi Hernandez DiMera

Chad will battle Gabi DiMera (Camila Banus) for control of DiMera industries this week, as Eli Grant (Lamon Archey) warns Gabi that Chad and Abigail DiMera (Kate Mansi) are on to him! Days of Our Lives viewers will recall from last week’s episodes that Gabi had wanted Eli, now head of security at DiMera, to spy on Chad because she suspected he was plotting against her. Abby walked in on him as he was starting to look through Chad’s laptop!

Lani Price, (Sal Stowers) now in a convent along with Kristen DiMera (Stacy Haiduk) confesses to Kristen why she really left Eli and how she was forced by Gabi to dump him at the altar. She will tell her how Gabi had an app on her phone that she could control Julie Williams’ (Susan Seaforth Hayes) pacemaker with, and how she threatened to literally blow up Julie’s transplanted heart from her late husband, Stefan DiMera (Brandon Barash) with the app unless she dumped him at the altar! Lani is still afraid that Gabi has the app on her phone (which it was revealed in last week’s Days of Our Lives that she does!) to kill Julie!