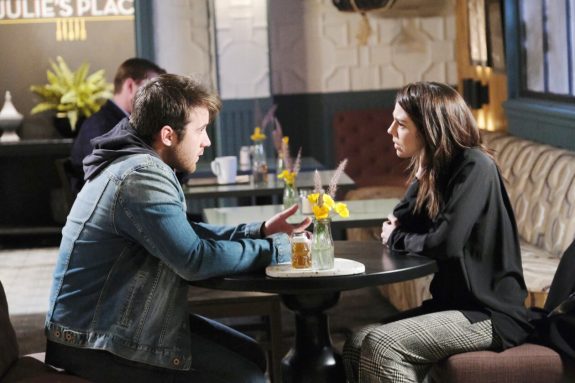 Days of Our Lives (DOOL) spoilers for Tuesday, November 26, tease that Lani Price (Sal Stowers) will have a confession to make. She’ll open up to Kristen DiMera (Stacy Haiduk) about the real reason she left Salem, so Kristen’s about to hear quite a story! Lani will talk about Gabi Hernandez’s (Camila Banus) vengeful plan, which involved rigging Julie Williams’ (Susan Seaforth Hayes) pacemaker and forcing Lani to dump Eli Price (Lamon Archey) at the altar.

DOOL Spoilers: Lani Price Will Have A Confession To Make

An appalled Kristen will push Lani to make a Salem comeback. She’ll insist there’s still hope for Lani and Eli’s relationship, but Lani will be wary of ratting Gabi out. Kristen will maintain that Eli needs to know the truth, but we can’t forget that rigged pacemaker is still inside Julie. Lani will point out that Gabi could still try to kill Julie, so the situation will remain complicated for now.

Other Days of Our Lives spoilers say Xander Kiriakis (Paul Telfer) will make a declaration of love. He’ll tell Sarah Horton (Linsey Godfrey) what’s in his heart, but their warm moment will be ruined soon enough. That’s because Eric Brady (Greg Vaughan) will burst in and reveal that he knows he’s Mackenzie “Mickey” Horton’s father.

Days Of Our Lives Spoilers: Eric Brady Will Clash With Xander Kiriakis

Eric’s arrival will lead to some serious clashing with Xander, but Sarah obviously won’t get off scot-free. DOOL fans know she deceived Eric about his child from the get-go, so she’ll have to answer for that. Over with Abigail DiMera (Kate Mansi), she’ll support JJ Deveraux (Casey Moss) as he continues to deal with his loss. Haley Chen’s (Thia Megia) death hit JJ hard, so he could really use his sister’s comfort and guidance right now.

Abigail will encourage JJ to open up about the incident that claimed Haley’s life, which JJ holds Kristen responsible for. He’s convinced Kristen intentionally shoved Haley down a flight of stairs, but Kristen swore it was an accident. Days fans probably won’t learn the truth just yet, perhaps some new details will come to light during this chat.

Next, Eli will tell Gabi they’ve got a problem. Abigail and Chad DiMera (Billy Flynn) are onto him, so Eli will warn that they have to be careful. He’ll probably agree to keep digging for Gabi’s sake, but he has to make sure he’s sneakier about it.