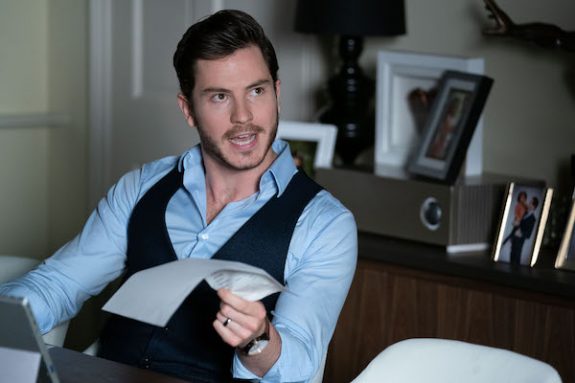 “EastEnders” spoilers for November 26 tease that Gray Atkins (Toby-Alexander Smith) has something up his sleeve for Mick Carter’s (Danny Dryer) wife swap competition.

Upcoming episodes reveal that Mick unveils his plans to win the “Best Pub” competition with a Walford wife swap. The Queen Vic landlord came up with the idea so he could cheer Linda Carter (Kellie Bright), who’s currently going through a rough time. However, the latter doesn’t seem interested in the idea.

Mick makes plans for the competition. He hopes for the best as the day of the competition arrives. As people gather at The Vic to hear the results, Gray has something else in mind. He’s confused about the entire thing and sets off to sabotage the results. What his he up to and what will he do to ruin the event?

The wife swap competition will stir up trouble for a lot of people in Walford. For instance, Ruby Allen (Louisa Lytton) will move into The Vic and stays with Mick and Ollie Carter (Harry Farr). Kat Slater (Jessie Wallace) ends up with Patrick Trueman (Rudolph Walker) while Kush gets paired with Sheree Truman (Suzette Llewellyn).

Viewers may recall that Jags previously went to school with Chantelle and they went on a date before. So, when Jags finally musters up the courage to walk up to Chantelle and strike a conversation, it’s easy for Chantelle to recognize him and they start to reminisce about the past.

Later in the week, the two will run into each other but Jags will have Kheerat Panesar (Jaz Deol) with him while Chantelle will be with Gray. Everyone knows how controlling Gray is and the idea that one of Chantelle’s exes is in town won’t sit well with him. What will Gary do about it?

Eastenders Spoilers: Honey Forced To Reconsider Going On A Holiday With Gary

Elsewhere, Honey Mitchell’s (Emma Barton) tries to avoid going on a holiday with Adam Bateman (Stephen Rahman-Huges). She uses her kids as an excuse to get out of the conversation. However, Billy agrees to babysit for her, thus forcing her to rethink the topic.