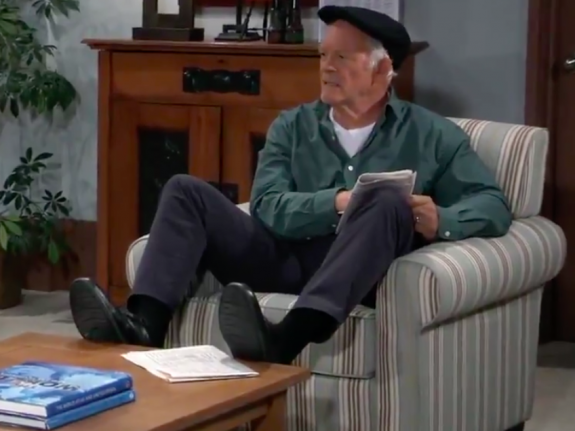 Monica leaves and Alexis updates Neil on her diagnosis. Alexis tells Neil about the cure for the poisoning. T.J. Ashford (Tajh Bellows) arrives and wants to talk to Alexis. T.J. wants Alexis’ permission to propose to Molly Lansing Davis (Haley Pullos). Alexis tells T.J. he doesn’t want to ask her permission. Alexis explains that Molly would say it wasn’t her place to answer. Alexis tells T.J. he has her blessing but now he needs to go back and figure out how to get Molly to say yes.

Alexis wishes T.J. luck as he leaves. Neil is on the way back to Alexis when he runs into Julian Jerome (William DeVry) who tells Neil about the dead rats. Julian mentions seeing Kendra Lennon (Michelle Argyris) in the ally before the rats appeared. Neil tells Alexis about his run-in with Julian. Neil has questions about what Alexis and Kendra work on. Alexis is stunned to realize Neil suspects Kendra.

General Hospital’s Trina Robinson (Sydney McKayla), Cameron Webber (William Lipton), Dev Corbin (Ashton Arbab), and Jocelyn Jacks (Eden McCoy) are all in detention. Dev says he shouldn’t be there. Cam apologizes to both Dev and Jocelyn. Jocelyn tells Cam she made her own choice. Dev says he can’t do better because he was being selfless. The teens discuss their post detention celebration party.

Trina wants to do a secret reveal as they play ball. Trina talks about the DNA test she took last year. Trina didn’t pursue the relative. Jocelyn asks for Cam’s secret. Dev tries to make up a lie about what he is in Port Charles. Trina wants to know if Dev is really Sonny’s cousin. Dev wonders why they are ganging up on him. Trina and Cam continue to push.

General Hospital’s Stella Henry (Vernee Watson) is with Mike Corbin (Max Gail) when Sonny Corinthos (Maurice Benard) and Carly Corinthos (Laura Wright) arrive to visit. Stella tries to warn them but they are unprepared for Mike’s condition. Sonny says this is much worse than the last time he visited Mike. Sonny tries to help Mike with his puzzle. Mike tells him to find his own puzzle. Mike is declining quickly. Stella explains that Mike might not have good days. Stella says it will only get harder from here. Stella prepares to leave. Mike asks her to take “Anthony” with her. Stella tells Mike his mom is on the way to get him.

Carly tries to calm Mike down. Mike and Stella say goodbye and Sonny follows her out. Sonny thanks Stella for all her help with Mike. Carly tells Stella how much Mike loves her. Stella says she promised Mike she would speak for him. Mike needs Sonny and Carly to help him say goodbye. Stella hugs Sonny and tells him he is a good son. Stella tells Sonny and Carly to take care of each other. Carly question why Sonny didn’t tell her it was this bad. Sonny thought Mike was just having bad days. Sonny and Carly decide to make the most of the time they have left. Mike wants ice cream, Carly promises to get it.

General Hospital’s T.J. meets with Stella and she invites him to visit her in London. T.J. tells Stella he’s going to propose to Molly. Stella tells T.J. he and Molly will have a hard road because Molly is white. Stella tries to explain to T.J. how bad things can get for a mix race couple. Stella wants T.J. and Molly to be safe if they get married. Stella gives her permission and wants a front role seat at the wedding.

General Hospital’s Franco Baldwin (Roger Howarth) is waiting for Monica in her office. Monica thought he and Kim Nero (Tamara Braun) had already moved away. Franco needs to talk about that. Franco offers to answer questions for Monica to help with the loss of Drew Cain (Billy Miller). Monica invites Franco to Thanksgiving dinner at the Quartermaine’s. Franco doesn’t think everyone would like that. Franco tells Monica about the storage locker she needs to check out. Julian runs into Franco and is upset that Franco has agreed to restore his memories. Franco and Julian argue over Kim.

General Hospital’s Julian arrives at GH and wants to know about Brad Cooper (Parry Shen) and Lucas Jones (Ryan Carnes) schedule. Liz Baldwin (Rebecca Herbst) can’t let him see the schedule but offers to check it for him. Liz tells Julian there are things he needs to know about Franco. Julian stops Liz. Franco runs into Liz and talks about the article he saw years ago. Franco says Monica would have been a good mom, she’s been a great friend. Liz visits Monica who disagrees with Franco’s choice.