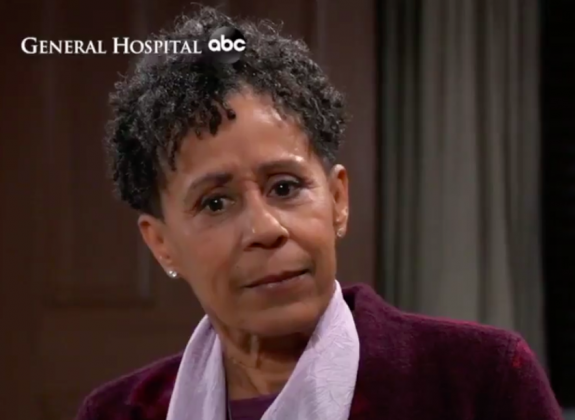 General Hospital spoilers tease that Stella Henry (Vernee Watson) may be hiding a secret involving her cousin “Wanda” who she’s spent the past six months with in London! She didn’t seem real happy in a recent episode of GH when Jordan and Curtis Ashford (Briana Nicole Henry, Donnell Turner) mentioned spending some time in London getting to know “Wanda” and spending some time with Stella there during a potential honeymoon trip!

It always has seemed peculiar and a bit suspicious that when Stella first discovered she had a relative she didn’t know about, she didn’t want to meet him or her when he or she was right there in Port Charles. TJ Ashford (Tajh Bellow) had originally discovered the relative when he sent everyone’s DNA to try to find a donor match for his mother, Jordan when she was in desperate need of a kidney. As General Hospital viewers will recall, she wound up getting a kidney from Ryan Chamberlain (Jon Lindstrom) through a series of misguided medical adventures at General Hospital! Then, Stella said she didn’t want to know the relative or who it was.

Then, later, she said she emailed the relative through the genealogy site and by that time it was a cousin named Wanda who had been in Port Charles but then her husband got transferred to London, England, so she decided to go on a trip to get to know her and the two traveled on a six month trip around the world! Now, that Curtis and Jordan mentioned London and a honeymoon trip there, Stella made a face and talked them out of it!

General Hospital #GH Spoilers: Why Didn't Nikolas Get Confused When He Saw Jason With His Old Face On The Docks? @celebratesoaps https://t.co/KwOUbMpEPy

Is There Really A Relative Named Wanda At All, Or Is Stella Henry Covering Up Something?

Is there really a relative named Wanda at all, or is Stella covering up something and just decided to go on an extended vacation, maybe not even overseas? She could have just gone somewhere close by but not close enough to be spotted and spent some time away, maybe in a timeshare at the beach or something! Nothing was ever said about Curtis, Jordan, or TJ taking Auntie Stella to the airport to catch a plane; the trip just came up all of a sudden and Stella had to catch a flight and said goodbye! Is it possible that Stella may still have a relative right there in Port Charles she wants to keep secret?

Could she even have a grown love child that she gave away at birth? If so, Marcus Godfrey (Nigel Gibbs) may want to know about this person as well, considering that he is most likely the father! General Hospital viewers would not be surprised at all if self-righteous Stella never wanted anyone to know about a secret love child she and Marcus had, and it would be a very good reason to move out of town to care for her sister! Who knows – it might even be Curtis! He could very well be her son instead of her nephew and she doesn’t want him to know!