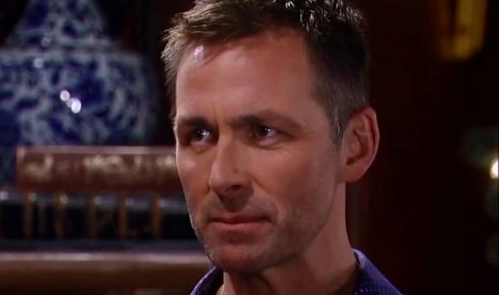 General Hospital (GH) spoilers for Tuesday, November 26, tease that Dustin Phillips (Mark Lawson) and Lulu Spencer (Emme Rylan) will discuss Thanksgiving plans. Dustin will wonder what Lulu and the kids are doing for the holiday, so there’s a good chance Dustin will end up celebrating with them. It should be a nice opportunity for Dustin and Lulu to grow closer.

In the meantime, Dev Cerci (Ashton Arbab) will remain in a bind. Trina Robinson (Sydney Mikayla) and Cameron Webber (William Lipton) will prove relentless as they rev up this grilling session. They’ll get Dev to concede that he’s not Sonny Corinthos’ (Maurice Benard) cousin. Cam will insist on knowing who Dev really is, but spreading the word could be risky. The last thing Dev wants is to do is get deported and land in more danger.

While Josslyn Jacks (Eden McCoy) hopefully helps Dev deal with all this, Neil Byrnes (Joe Flanigan) will be busy helping Alexis Davis (Nancy Lee Grahn). She just realized Neil believes Kendra Lennon (Michelle Argyris) poisoned her, but she’ll be reluctant to buy that on Tuesday. Alexis just won’t see what motive Kendra would have to hurt her.

Of course, Alexis doesn’t realize Kendra’s connected to Kiefer Bauer (Christian Alexander) and is out for revenge! Neil will send a pill Kendra gave Alexis to the lab, but the results won’t be what he expected. The pill will be harmless gingko biloba, so Neil won’t understand how he got this wrong. He won’t know that the drink powder is what actually sent Alexis to GH.

Despite the seemingly exonerating test results, Alexis will continue to mull over Kendra as a suspect. Once Neil puts the idea in Alexis’ head, she won’t be able to get it out. That’s good news since Alexis is on a path to the truth, but more danger is headed her way soon.

Speaking of danger, Hayden Barnes (Rebecca Budig) will land in some on the pier. After Valentin Cassadine (James Patrick Stuart) delivers terrible orders, a baddie will be sent down there to abduct Hayden. She’ll be an emotional wreck after a near-snatching, but Nikolas Cassadine (Marcus Coloma) will insist he got her into this mess and can help get her out.

Nikolas will think Hayden should leave Port Charles and go underground. The thought of leaving Violet Barnes (Jophielle Love) behind will be tough to accept, but that’s what Hayden will ultimately decide to do. She’ll just have to trust that Violet will be in good hands with her father, Hamilton Finn (Michael Easton).

Other General Hospital spoilers say Laura Webber (Genie Francis) will meet with Jasper “Jax” Jacks (Ingo Rademacher). They’ll discuss the codicil hunt and how they need to step up their game. Jax will think it’s crucial to find out what Ava Jerome (Maura West) knows about the portrait. He’ll also hope to learn what Ava’s done with it, but Laura may have concerns about pushing Ava too hard right now.