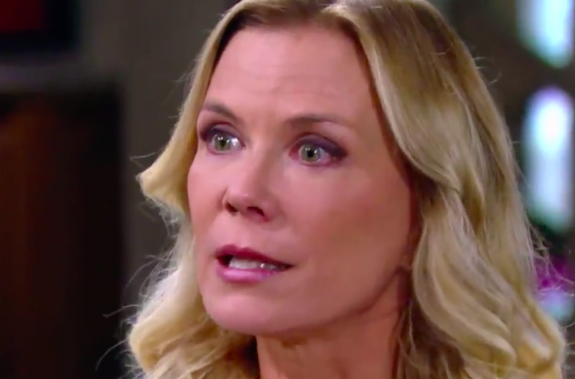 The Bold and the Beautiful spoilers for Tuesday, November 26, tease that Ridge Forrester (Thorsten Kaye) will demand some answers from Brooke Forrester (Katherine Kelly Lang). As B&B viewers know, Brooke has just spilled the beans to Ridge about how she and Hope Logan (Annika Noelle) were under the belief that Thomas Forrester (Matthew Atkinson) had died.

As B&B viewers will remember, Hope had pushed Thomas aside on the catwalk at Forrester Creations, and he fell into an open vat of liquid. Thinking that the vat was filled with hydrofluoric acid, Hope panicked and didn’t know what to do. Instead of calling 911 or telling anyone about the accident, she took Douglas Forrester (Henry Joseph Samiri) and went home to Brooke’s mansion.

From there, Brooke urged Hope to keep Thomas’ “death” a secret, so that she wouldn’t be implicated in his death. But then Thomas showed up 24 hours later, very much alive, and Brooke knew that Ridge was going to hear the story from either her or from Thomas, so she decided to get in front of it and tell Ridge herself.

The Bold and the Beautiful Spoilers: Sally Spectra Makes A Huge Blender – Wedding At Stake?

B&B Spoilers: Ridge Forrester Is Shocked By His Wife’s Actions

Having heard the tale, Ridge is now shocked and is trying to process what happened and what Brooke did – or, more accurately, what she didn’t do. According to B&B spoilers, things won’t go well from here, and their relationship will change forever in an emotional moment. Ridge will probably confront Brooke about why she concealed Thomas’ death from him, and he’s going to want to hear details.

Of course, Brooke will probably try to explain that she was trying to protect Hope, and that nothing she did or didn’t do ended up hurting Thomas. But that’s not going to sit well with Ridge, who will be horrified that Brooke thought it was acceptable to conceal his son’s accident and presumed death from him.

Bold And The Beautiful Spoilers: Ridge Forrester Walks Out On Brooke Forrester

According to B&B spoilers, Ridge will be furious with Brooke, and he’ll decide that this is simply the last straw for their marriage. B&B viewers should brace for some emotional scenes as Brooke pleads with Ridge not to walk out on her and to see things her way. But it doesn’t look like Ridge will be willing to stick around, especially after he realizes that Brooke might never have come forward if Thomas hadn’t reappeared.

At any rate, it appears that Ridge will decide that he’s had enough, and he’ll walk out on Brooke. Whether he formally announces that their marriage is over remains to be seen, but it certainly appears that Brooke will get the picture pretty clearly that Ridge is done.

B&B Spoilers: Hope Logan & Thomas Forrester Are At A Crossroads

Meanwhile, on Tuesday’s new episode of B&B, Thomas and Hope will find themselves at a crossroads. As B&B viewers know, Hope has just learned that Thomas will not be contesting the paperwork that he signed allowing Hope to adopt Douglas. That came as a surprise to Hope, but she’s happy about the development, although she’s a bit concerned about how co-parenting is going to work between her and Thomas.

As B&B viewers know, Hope previously was plotting to adopt Douglas and get joint custody of him, so that she could later file for sole custody and take him away from Thomas completely. But does she still want to do that? Perhaps the scare over Thomas’ “death” has caused her to rethink her plan – after all, she was pretty worried about Douglas losing his father, so that might have changed her perspective a bit.

Bold And The Beautiful Spoilers: Douglas Forrester Gets Some Great News

The Bold and the Beautiful spoilers say that Hope and Thomas will decide to tell Douglas that she is his new mother. It looks like Douglas will still be awake, so they’ll go to his room and give him the good news. It should make Douglas pretty happy to hear the news, since he loves Hope so much and has wanted her to be his new mother for some time.

And who knows – this could be the start of a decent relationship between Hope and Thomas going forward. They may still have some issues to work out, but coming together for Douglas’ sake could be the impetus for a good co-parenting relationship for them.