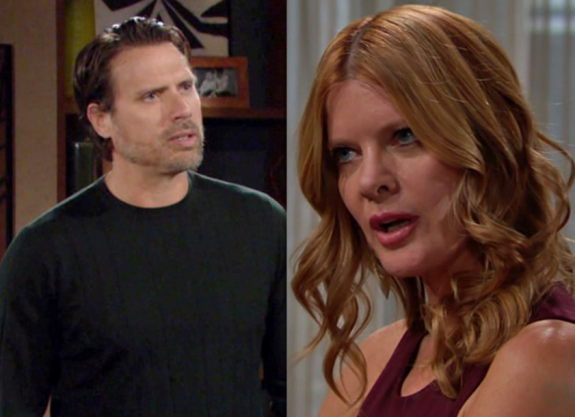 Nick Newman (Joshua Morrow), what are you thinking on ‘The Young and the Restless’? Don’t be fooled by her!

Phyllis Summers (Michelle Stafford) has been trying to connect with numerous people since this character reverted to her iconic status earlier this year. So, it comes as no surprise that she would try to get back in with Nick again.

But for Nick to seemingly be receptive to Phyllis because Chelsea Newman (Melissa Claire Egan) is going through a rough time with her son is a sign of his weakness. With that, fans of Morrow’s character should be frightened.

Young And The Restless Spoilers – No To Shick, But Phick Again?

Hardcore viewers and ‘Shick’ fans unabashedly say that Sharon Newman (Sharon Case) was, is, and, yes, will always be Nick’s greatest love. The infuriating, repeated attempts this couple made at officially reforming via marriage have gone unrealized since Cassie Newman’s (Camryn Grimes) tragic death in 2005.

So, no to getting back with Sharon on various occasions, but Phyllis is being considered? Come on!

‘Phick’ only formed because Phyllis took advantage of Nick’s mishandled grief. Her more recent reboot with him during Gina Tognoni’s (Phyllis) well-played era didn’t result in another marriage. But she was living with Nick at the home he built for Sharon when ‘Shick’ was finally supposed to get remarried.

Young And The Restless Spoilers – Chick In Serious Trouble

Phyllis senses Nick’s vulnerability. That’s why Red’ tried an old trick now that there’s daylight between him and Chelsea.

The video games Phyllis and Nick were playing on their smartphones in Society’s lounge area poked anti-‘Phick’ fans, as that was one of this former couple’s favorite past times. Their shared digital enjoyment actually represents a belief that intense competition is good.

‘Chick’ is in a vulnerable state because Chelsea needs to be with Connor Newman (Judah Mackey) right now. The problem with that choice is she allowed him to live with Adam Newman (Mark Grossman) at the penthouse, which is ‘Chadam’s’ old stomping grounds.

All of the above means that Chelsea just might have her heart tugged by Connor’s dad, as much as by her son. And with that, Phyllis gains an opportunity.

Young And The Restless Spoilers – Great Actors Have Chemistry

Fans are fully sincere about not wanting Nick to be with Phyllis because she’s arguably proved to be a bad influence in the past and prevents him from being with perceived better pairings. At the same time, there’s no reasonable question that Morrow and Stafford, great actors in their own right, are also terrific on screen together.

So, ‘Phick’ might happen. Phyllis needs someone to love and torture. Nick needs a play mate and Phyllis is one of his best ever partners.

Maybe the real fear is that ‘Phick’ might work this time. Although that would ignore daytime history.