The Young and the Restless Spoilers: Tuesday, November 26 – Colin Busted, Tries To Implicate Cane – Connor Kicked Out Of School – Abby & Chloe Deal With A Theft 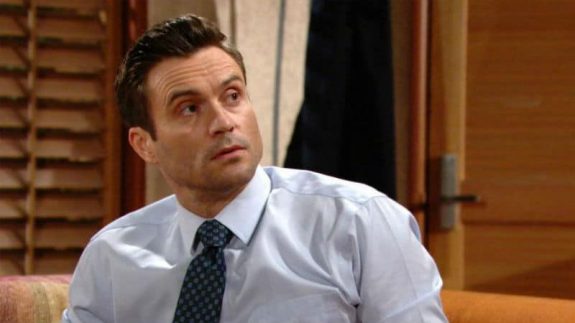 The Young and the Restless spoilers for Tuesday, November 26, tease that Devon Hamilton (Bryton James) will catch up with Nick Newman (Joshua Morrow) at Society. They’ll discuss Nick’s decision to drop out of the city council race as well as the ongoing situation regarding Katherine Chancellor’s (Jeanne Cooper) will. Devon will be upset that he got scammed, and Nick will do his best to reassure Devon.

Next on Y&R, Jill Abbott (Jess Walton) will ask Colin Atkinson (Tristan Rogers) how he’s paying for his digs in the Maldives, and he’ll say that she doesn’t want to know. Chance Chancellor (Donny Boaz) will arrive, and Jill will try to tell him how this whole thing is a big misunderstanding. But Chance will insist that Cane Ashby (Daniel Goddard) doesn’t deserve a penny of Katherine’s money.

Cane will then appear, and the three men will be in a standoff. Chance will ultimately encourage Colin to confess, and he’ll suddenly exclaim that the whole thing was Cane’s idea. Colin will go on to say that Cane had reasons for hiring Amanda Sinclair (Mishael Morgan), which will anger Cane who will insist that he’s the victim here.

The Young And The Restless Spoilers: Devon Confronts Cane—Was He In The Plot To Steal His Inheritance?

Young And The Restless Spoilers: Colin Atkinson Will Pay For His Place With Someone Else’s Cash

Colin will then claim to have been able to pay for this place with cash from Cane’s account, then he’ll make his big escape and run out. Cane and Chance will catch Colin and bring him back, with Jill furiously mad. Cane will say that he’ll do whatever it takes to get justice for Devon and clear his name.

Next on Y&R, Chelsea Lawson (Melissa Claire Egan) will tell Adam Newman (Mark Grossman) that she’s rearranged things back to how they were when she lived there – she needed to keep busy. They’ll discuss Connor Newman (Judah Mackey) going back to school, and Chelsea will battle guilt over what happened to Connor. Adam will reassure her.

Meanwhile, at the Grand Phoenix, Abby Newman (Melissa Ordway) will chat with Chloe Mitchell (Elizabeth Hendrickson). Two women hotel guests will appear – they’ll have expensive jewels with them, which Abby will advise them to place in their room safe. Chloe and Abby will discuss Chance, as Abby will wish she had his expertise right about now. Through their discussion, Abby will wonder if there’s a bad boy lurking within Chance.

Next on Y&R, Adam and Chelsea will discuss their discussion with the school principal, who will have asked them to take Connor out of school and homeschool him. Sharon Newman (Sharon Case) will appear and will say that they should prioritize his emotional needs over his schoolwork. Sharon will think that things will get better for Connor.

Chelsea will talk with Nick and tell him that she and Adam are handling Connor’s situation together. Meanwhile, Sharon will chat with Adam regarding her connection with Connor. Chelsea will return and after Sharon leaves, Adam will tell Chelsea that she needs to stop feeling guilty about what’s happened.

Young And The Restless Spoilers: Will Nick And Phyllis Get Back Together? https://t.co/5BVTRgyDEt pic.twitter.com/vhg3VWCqQf

Young And The Restless Spoilers: Abby Newman Deals With Another Problem

Back at The Grand Phoenix, the two guests will have returned from dinner, when one of them reveals that they’ve been robbed, and their jewelry is gone. However, they won’t want Abby and Chloe call the police because they lied to their husbands about where they are.

Finally, on Tuesday’s new episode of Y&R, Sharon will talk with Nick at Society. She’ll say that she’s sorry that he dropped out of the city council race when he did nothing wrong. Nick will say that he’s going focus on his New Hope business and do his best to get Chelsea through this tough time. Sharon will say that Chelsea and Adam seem committed to putting Connor first.