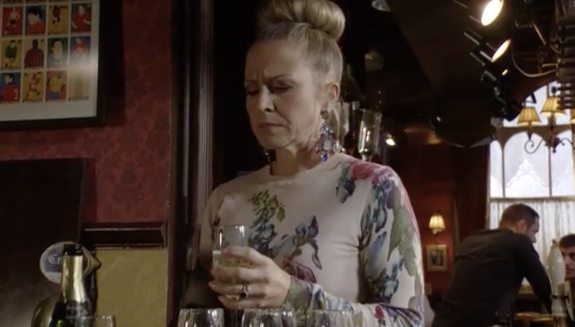 Eastenders spoilers for the week of November 25 reveal an arrest, one character will have increased guilt about a death and tempers cause concern. Keep reading to find out everything that is going to happen this week on the popular soap opera.

It has been previously teased that one character could have an alcohol addiction storyline. That character is none other than Linda Carter (Kellie Bright). She drives Ollie Carter (Harry Farr) to school with a hangover from the night before. She ends up backing up into another vehicle. Linda drives away and hopes nobody saw the fender. However, the authorities soon catch up with her and she is arrested for drunk driving.

Following Mel Owen’s (Tamzin Outhwaite) death, Sharon Mitchell’s (Letitia Dean) secret about her affair and baby is safe. However, she has a guilty conscious and it’s just getting worse. Fans recall from last week when she was cleared of any wrongdoing in Mel’s horrifying death. However, that doesn’t make things any easier for Sharon.

Eastenders spoilers tease that Martin Fowler’s (James Bye) temper is causing concern with others. His marriage to Stacey Fowler (Lacey Turner) is in shambles. He worries that Stacey might not return and ends up venting.

It gets even worse with someone mentions Stacey’s name. It pushes him to get even angrier and he has an extreme verbal outburst.

After being confronted by his mother, Kathy Beale (Gillian Taylforth), Ben Mitchell (Max Bowden) made a promise to change his ways. Wanting to prove himself, he helps Sonia Fowler (Natalie Cassidy). As fans recall, she saved his life in the September Queen Vic siege.

Which storyline are you looking forward to the most this week? What do you expect to happen with your favorite characters on the BBC soap opera? Fans will have to keep watching the find out what happens next.

Remember, new episodes air on BBC One every Monday, Tuesday, Thursday and Friday. For those outside the area, you can watch all your favorite British soaps on BritBox.