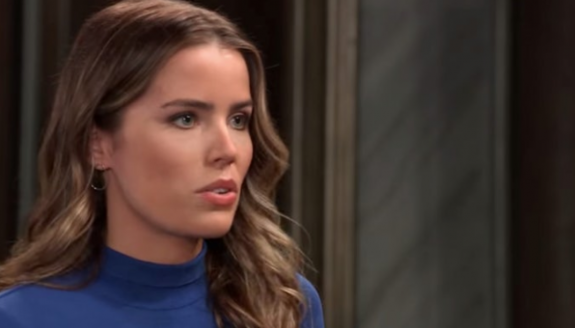 General Hospital (GH) spoilers for Wednesday, November 27, tease that Lucas Jones (Ryan Carnes) will corner Brad Cooper (Parry Shen) again. He’ll just want the truth for once, so he’ll push Brad to come clean and divulge what he’s hiding. Since Brad can’t confess without blowing up his family, he’ll have to stay tight-lipped and hope there’s another way to get past this.

Meanwhile, Anna Devane (Finola Hughes) will enjoy seeing how happy Hamilton Finn (Michael Easton) is. He’ll remain over the moon about having Violet Barnes (Jophielle Love) in his life, but Hayden Barnes (Rebecca Budig) will be stuck in a crisis across town. Valentin Cassadine’s (James Patrick Stuart) just showed up to grab Hayden on the pier, but she’ll manage to escape this abduction attempt.

However, Nikolas Cassadine (Marcus Coloma) will think this proves his point. He’ll reiterate to Hayden that she has to leave NOW. Nik just won’t see any other way to guarantee Hayden’s safety. It looks like Hayden will fear for her daughter’s safety as well. It’s probably not a good idea for Hayden to be in Violet’s orbit right now, so she’ll choose to leave her daughter behind with Finn. It’ll break Hayden’s heart, but she just won’t feel like she has any other choice.

Other General Hospital spoilers say Valentin will feel large and in charge! He just found out what Jasper “Jax” Jacks (Ingo Rademacher) and Laura Webber (Genie Francis) are after thanks to Martin Gray’s (Michael E. Knight) recording. Valentin is now in the loop on the codicil hunt, which certainly gives him an advantage. He’ll make it clear to Martin that he has no intention of losing anything.

Over with Alexis Davis (Nancy Lee Grahn), she’ll beat herself up for letting Kendra Lennon (Michelle Argyris) into her life. Alexis will feel like she rolled out the carpet for someone who wanted her dead. Later, the test results on that pill will come in. Neil Byrne (Joe Flanigan) will be taken aback when his theory doesn’t seem right. The pill will be harmless, so Neil won’t understand how he arrived at the wrong conclusion.

Of course, GH fans know Neil arrived at the right one; he just didn’t go about proving it in the right way. The pill may be harmless, but the powdered drink supplement definitely wasn’t! Fortunately, Alexis’s suspicions about Kendra will remain. She’ll trust her instincts instead of the evidence, which will put her on a path to the shocking truth.

Finally, General Hospital spoilers say Willow Tait (Katelyn MacMullen) will feel a bit pensive. She’ll be introspective on Wednesday’s episode, but Sasha Gilmore (Sofia Mattsson) will try to help. GH’s preview video shows Sasha saying, “It isn’t my place to ask, but are you—” Willow replies, “Please…don’t.” She won’t be interested in talking about this out in public, so what’s going on here?

It’s possible a pregnancy scare is on the way for Willow. That would explain why Sasha’s so curious about something that isn’t her business. It would also explain Willow’s unsettled behavior, so it’ll be interesting to see it that’s how things pan out.