‘The Bold and the Beautiful’ Spoilers: Steffy Ready To Support Family – Thope and Bridge Drama Continues 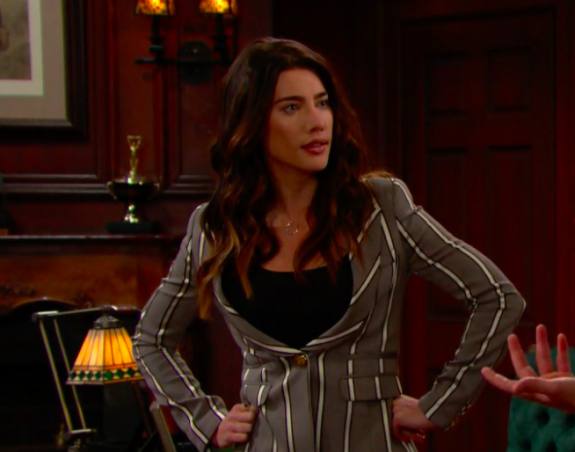 The Bold and the Beautiful spoilers tease that Steffy Forrester (Jacqueline MacInnes Wood) is prepared to help her brother handle his latest issues. She’s also ready to assist her father in dealing with his ongoing marital concerns.

While Thomas Forrester (Matthew Atkinson) and Ridge Forrester (Thorsten Kaye) continue to remain off-balance, Steffy is continues to steady the family ship as much as she can. Ridge can be thankful that Steffy isn’t like Thomas. She’s dealt with her problems, which include ones she’s caused or simply has been part of. That sets her apart from his oldest son, who projects narcissism, among other things.

The Bold and the Beautiful Spoilers: Sally Spectra Makes A Huge Blender – Wedding At Stake?

Steffy’s leadership at Forrester Creations is only topped by the selfless care she offers to her daughter, Kelly Spencer (Zoe Pennington and Allison Marcia Sweeney). Both traits make Wood’s alter ego the go-to family member Thomas and Ridge need.

While he has his moments of lucidity, Atkinson’s character is trapped by his own inability to overcome mental health issues. However, Ridge has enabled him, most especially by burying what Thomas did to Emma Barber (Nia Sioux) on and over the side of Mulholland Drive last summer. In contrast, Steffy speaks truth to Thomas.

Ridge and Brooke Logan Forrester (Katherine Kelly Lang) haven’t been totally honest with each other for many months. Momentum toward Bridge’s break has increased due to Ridge and his wife allowing their children’s problems to interfere with their own relationship as well.

Steffy’s focus on FC has allowed her dad to repeatedly dart off during the business day to handle whatever crisis Thomas created or Brooke supposedly caused. Until Ridge pulls back from the edge of his self-created cliff, he’ll need to rely on Steffy as the most stable force in his own family.

Bold And The Beautiful Spoilers – Time To Choose Herself Again

It’s right and often necessary to help family members and friends. However, the residents in this fictional version of Los Angeles, California, which include Steffy, know that one’s personal well-being matters.

While it sounds self-centered and can be a cliche, self-care is positive. Thomas isn’t familiar with this concept. Ridge is trying to protect his son, however misguided various efforts may be. But allowing Shauna Fulton (Denise Richards) to play the groupie isn’t an honest way to spend time during Bridge’s split.

Rather than getting fully caught in Ridge and Thomas’ issues, Steffy may need to choose herself, as she did when the Steam verses Lope battle was raging last year. Whether her family’s problems are solved, or not, Steffy must consider what’s best overall for Kelly and for herself.