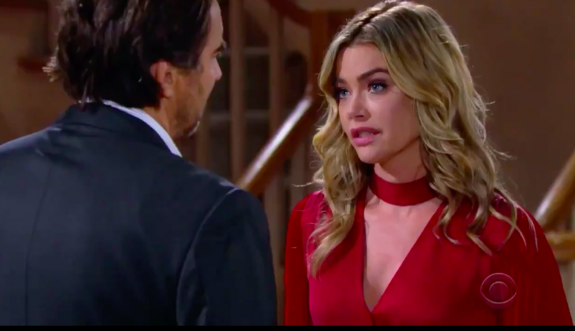 The Bold and the Beautiful spoilers for Wednesday, November 27, tease that Hope Logan (Annika Noelle) and Liam Spencer (Scott Clifton) will get some big news. They’ll hear some stunning details from Brooke Forrester (Katherine Kelly Lang) about what went down the night before. As B&B viewers know, Ridge Forrester (Thorsten Kaye) told Brooke that their marriage was over and that he was officially done.

Brooke will share the news with Hope and Liam, who will both no doubt offer their heartfelt sympathy and support to Brooke. Of course, Hope will know that Brooke had gone to see Ridge the night before in order to tell him about how she had known about Thomas Forrester’s (Matthew Atkinson) supposed death but kept it from him. Hope will probably deduce pretty quickly why Ridge decided to call it quits on the marriage.

‘The Bold and the Beautiful’ Spoilers: Steffy Ready To Support Family – Thope and Bridge Drama Continues

But it looks like Liam will still be in the dark about what happened between Hope and Thomas. He won’t know that Hope went for a full day thinking that she had killed Thomas, so through the course of Brooke explaining Ridge’s decision to leave her, Liam will get the news about how Hope pushed Thomas into a vat of what was supposed to be hydrofluoric acid.

Liam is probably going to be stunned to hear what Hope went through, and how she believed she had killed Thomas. He’s probably going to have a lot of questions about the whole thing, and he might be a little peeved with Hope for keeping all of that from him, especially the part about how she plotted to use Thomas’ feelings for her against him.

As B&B viewers know, Liam had previously suspected that something was terribly wrong with Hope, since she just wasn’t acting right when she told him that Thomas agreed to sign the custody papers. Now he’ll get the whole story, and he’ll probably find himself angry with Thomas and wanting to lash out. We’ll see how Hope reacts to that, since she and Thomas seemed to have reached common ground about co-parenting Douglas Forrester (Henry Joseph Samiri).

Meanwhile, on Wednesday’s new episode of B&B, Ridge will have some big news for Shauna Fulton (Denise Richards). As B&B viewers know, Ridge is in desperate need of support and friendship after his breakup with Brooke, and he’ll get just that from Shauna. Shauna has been a huge source of support for Ridge lately, and he’ll turn to her with the news that his marriage to Brooke is done.

It looks like Ridge and Shauna will have a long talk, during which Ridge opens up about what he found out from Brooke. Shauna will listen and chime in with supportive and complimentary statements as usual, and it looks like the two will wind up kissing once again. Shauna will even ask Ridge to stay with her, although this might be too much for Ridge to deal with right now.

B&B weekly previews indicate that Brooke will eventually find out about how much time Ridge is spending with Shauna, and she’s going to be peeved. Brooke may still be hoping that their marriage can be saved, and she’ll resent the fact that Shauna is right there in Ridge’s face all the time and taking advantage of the situation.