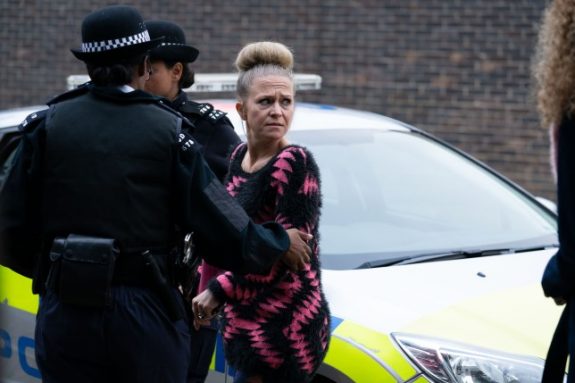 Eastenders spoilers teased that one character could have a storyline that dealt with the issue of alcohol abuse. Back in September, it was confirmed that it would be Linda Carter (Kellie Bright). Now things are really getting serious. In fact, fans are genuinely concerned for the character and her future.

The soap opera is known for having serious, real-life storylines that affect fans. The goal of these plots is not to just provide a story, but to help those who are struggling. The next hot topic is going to focus on alcohol abuse, which affects millions of people worldwide. Young, old, blue-collar workers, white-collar professionals, rich and poor are all affected. So, it definitely doesn’t discriminate.

It has been revealed that on tonight’s episode of the soap opera, Linda will be informed that she is banned from driving and must pay a fine, as well as take a course.

It occurs after she had a hangover, but was obviously still technically drunk. She drove her youngest child to school and had a fender bender. Hoping nobody would notice, she raced off. However, her accident was seen and the police were notified. They eventually caught up with her and delivered her some stern consequences.

Eastenders spoilers tease that even though Linda tries to abstain from drinking until later, she doesn’t do it in moderation. She chugs the wine back like it’s nobody’s business. She isn’t just relaxed, she isn’t buzzed or even tipsy. The girl gets drunk. What makes it worse is that she is keeping her driving ban from her husband.

Fans are becoming increasingly concerned about Linda and her dependence on alcohol. One said that she needs to get her head on straight. Another commented that drinking alcohol is not the answer. Executive producer Jon Sen spoke about the storyline, according to The Sun.

“Linda’s descent into alcoholism will be instantly recognizable to many – a journey that begins with a single drink to cope with the everyday ups and downs but quickly escalates to a point which wreaks devastation on their life and the lives of those around them.”

EastEnders Spoilers – He added the importance of this story by saying,

“In telling Linda’s story we hope that anyone in Linda’s situation or those around them notice the signs of alcoholism and seek the help needed.”