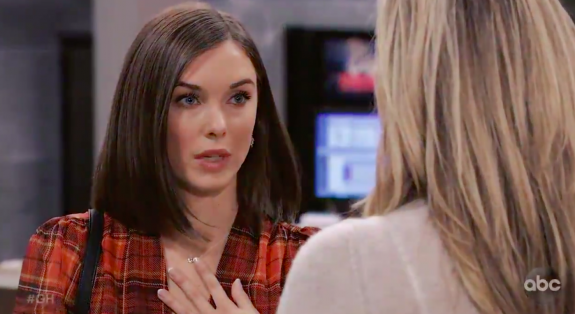 Anna is thrilled the Finn is so happy. Willow and Chase leave and go to the Floating Rib. Finn thanks Anna for accepting Violet into their lives. Anna is enjoying seeing Finn embrace fatherhood. Finn and Anna kiss, Violet sings to them. Hayden Barnes (Rebecca Budig)stops to see Violet and tells Finn everything she has brought for their daughter.

Hayden wants to say goodnight to Violet before leaving. Hayden gives Violet a hug. Hayden tells Violet she loves her and she can draw now. Hayden slips a note into Violet’s bag before leaving. Finn speaks to Hayden before she leaves. Finn promises to take care of Violet. Hayden breaks down as she leaves.

General Hospital’s Michael Corinthos (Chad Duell) invites Sasha Gilmore (Sofia Mattsson) to dinner at both his family functions. Liesl Obrecht (Kathleen Gati) joins them. Sasha and Michael tell Liesl about the third DNA test. Liesl says Curtis Ashford (Donnell Turner) needs to mind his own business. Michael questions where Valentin got the DNA samples that he gave Sasha. Michael says they couldn’t have come from Nina Reeves (Cynthia Watros) because they would have been an exact match.

Willow and Chase join them. Willow doesn’t feel well and goes to the restroom. Sasha follows and asks if she is alright. Willow may be pregnant. Michael and Chase talk about Nelle Benson (Chloe Lanier). Michael asks if Chase thinks about being a father. Sasha tells Willow she has to tell Chase what is going on. Willow and Chase need to figure their life out together. Sasha suggests she be honest.

General Hospital’s Brad Cooper (Parry Shen) comes to visit Lucas Jones (Ryan Carnes) and asks to have dinner together. Lucas says Brad is still lying to him and he wants no part of it until he’s honest. Brook Lynn Ashton (Amanda Setton) drops by to see Lucas at the hospital.

Brad blames Liesl for Lucas barely speaking to him. Brad cries and Liesl thinks he has lost it. Lucas talks to Brook about his and Brad’s problems. Brook gives Lucas a pep talk about family and celebrating. Liesl tells Brad to be strong and keep lying. Brook tells Lucas his marriage is in trouble and he needs to fix it. Brad calls Britt Westbourne (Kelly Thiebaud) to wish her a Happy Thanksgiving.

General Hospital’s Valentin Cassadine (James Patrick Stuart) learns from Martin Grey (Michael E. Knight) that his father changed his will taking everything from him. Martin tells Valentin that he will lose the shirt off his back if Nikolas Cassadine (Marcus Coloma) finds that painting first. Valentin believes he is about to lose everything to a teenager. Valentin wants Martin to put eyes on Spencer Cassadine (Nicholas Bechtel). Valentin doesn’t want to kill the kid. Valentin wants Laura Webber (Genie Frances) to know he can get his hands on Spencer at any time.

General Hospital Spoilers: Laura And Jax Get A Surprise Visitor – Or Will It Be Two? https://t.co/aQZhQOWplb pic.twitter.com/kHz0l2RagD

General Hospital’s Nikolas hires a man to play Valentin’s henchman and he grabs Hayden Barnes (Rebecca Budig) but Nik saves her. Nik tells Hayden she has to leave now. Nik tells Hayden he knows she loves her daughter but Finn can keep her safe. Nik tells Hayden giving up Violet, for now, is the best way to protect her. Hayden takes some of Violet’s things to Finn’s before leaving town. Nik plays off his kidnapper before waiting for Hayden to join him.

General Hospital’s Neil Bryne (Joe Flanigan) and Alexis Davis (Nancy Lee Grahn) discuss his suspicions about Kendra Lennon (Michelle Argyris). Neil puts a stop to Alexis trying to blame herself for her attack. Alexis tries to tell Neil it could be anyone trying to kill her. Neil doesn’t see what Alexis felt the need to fix her life in the first place. Neil tells Alexis how well he thinks she was doing.

Neil wants to know why Alexis doesn’t trust her opinion of herself. Neil calls Alexis endearing, she disagrees. Neil tells Alexis she is more than enough and hopefully, she will see that one day soon. Alexis does her make-up while Neil checks on the test results.