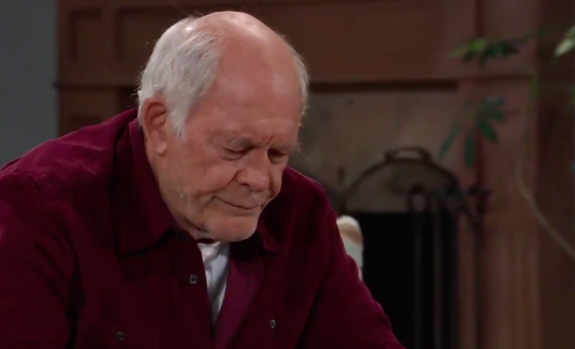 General Hospital (GH) spoilers for Thursday, November 28, tease that Maxie Jones (Kirsten Storms) will be eager to spread the word. During a visit at Anna Devane’s (Finola Hughes) house, Maxie will wonder if Peter August (Wes Ramsey) shared the good news. She’ll probably relay that Peter decided to move in with her, so Anna should be pleased the couple’s happy and moving forward in their relationship.

GH Spoilers: Maxie Jones Will Be Eager To Spread The Word

However, Anna will also sense that Peter’s battling his nerves. She’ll begin to wonder why Peter’s behaving so strangely, but GH fans know it’s due to the mountain of secrets he’s keeping! Over with Andre Maddox (Anthony Montgomery), he’ll assure “Drew Cain” aka Franco Baldwin (Roger Howarth) that it’s not too late to change his mind. He’ll want “Drew” to be completely confident in his decision to have the memory reversal procedure.

“Drew” will assure Andre this is still what he wants. Of course, he’ll squeeze in a celebration at the Quartermaine mansion first. “Drew” will attend the Thanksgiving gathering – at least for a while. He’ll soak up his last moments as “Drew” and prepare to give Franco his life back.

General Hospital Spoilers: Alexis Davis Will Be On The Edge

In the meantime, Alexis Davis (Nancy Lee Grahn) will be on edge. It won’t take Kendra Lennon (Michelle Argyris) long to sense that something’s off, so she’ll wonder what Alexis isn’t telling her. Despite the harmless pill test results, Alexis will remain wary of Kendra. General Hospital spoilers say another murder attempt is coming up, so Alexis has a good reason to be worried!

Speaking of reasons, Michael Corinthos (Chad Duell) will hear plenty of bogus ones from Brad Cooper (Parry Shen). He’ll call Brad out for making excuses and suspect he knows why. Michael may think Brad’s trying to cover up his obvious marital problems. Michael would much rather see Brad and Lucas Jones (Ryan Carnes) talk this out, so he might offer to watch “Wiley Cooper-Jones” (Erik and Theo Olson) for his dads.

At GH, Lucas will surprise Elizabeth Baldwin (Rebecca Herbst). He’ll insist he’s afraid there’s been a terrible mistake. Perhaps Lucas will try to wiggle out of working his latest shift so he can focus on his family. He planned to distract himself this Thanksgiving, but Brook Lynn Ashton (Amanda Setton) helped him realize saving his marriage was more important.

Elsewhere, Julian Jerome (William deVry) will seemingly tamper with Brad’s car. He’ll feel like Brad’s left him no choice, but he won’t realize he’s about to put his own son in danger. It looks like Lucas may end up driving that car during his upcoming argument with Brad!

Other General Hospital spoilers say Mike Corbin (Max Gail) will come home for Thanksgiving. His family will hope to give him a nice holiday, but things will take a scary turn when Mike holds Donna Corinthos. Mike will gush over the baby and wonder what her name is. Carly Corinthos (Laura Wright) and Sonny Corinthos (Maurice Benard) will rush in along with Michael and “Wiley.” There’ll undoubtedly be some concerns about Mike possibly dropping Donna or hurting her somehow.