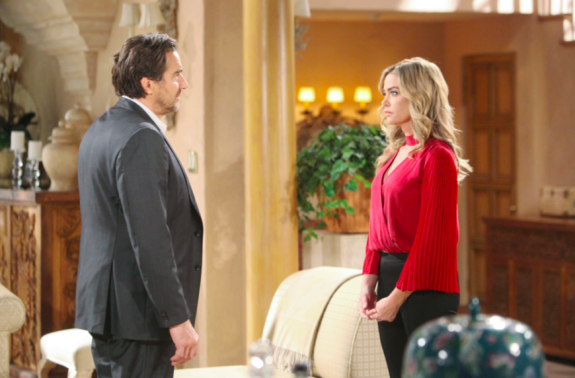 The Bold and the Beautiful spoilers for Monday, December 2, tease that things are really heating up on the CBS soap. But before we get to that, we have a programming note. B&B is currently scheduled to air an encore episode on Thursday, November 28th for the Thanksgiving holiday. Then, on Friday, November 29th, B&B will be nationally preempted for football programming. So, the next new episode that viewers will see is on Monday, December 2nd.

On Monday, Shauna Fulton (Denise Richards) and Ridge Forrester (Thorsten Kaye) will continue their conversation at the Forrester mansion. They’ve just shared a tender kiss, and as B&B viewers know, Shauna was feeling a bit insecure after Ridge lamented about his marriage to Brooke Forrester (Katherine Kelly Lang) ending. Although Ridge was clear that his marriage to Brooke was kaput, he nevertheless called Brooke the love of his life and said that no one else could compare to her.

The Bold and the Beautiful Spoilers: Hope’s Guilt Goes Further – Blames Herself for ‘Bridge’ Going Down

That was difficult for Shauna to hear, and she decided that as much as she likes Ridge, she needed to leave. Ridge then apologized and asked Shauna not to leave. Now the two are kissing, and it appears as if Shauna might want more from Ridge. But will Ridge want to take things farther than a kiss at this point? He seems pretty comfortable with Shauna, but then again, he’s just ended things with Brooke.

According to B&B spoilers, Shauna will take Ridge by surprise with her understanding, so it looks like the two will do some more talking. Shauna has been great at offering Ridge support during this difficult time, so perhaps she’ll have some more words of encouragement. At any rate, it seems that the two will smooch some more, and that Quinn Forrester (Rena Sofer) will happen upon them as they’re kissing.

In fact, ongoing B&B spoilers say that Quinn will later grill Shauna about the smooch that she sees. Of course, Quinn knows that Ridge and Shauna have kissed before, but for them to be kissing right in the middle of the Forrester living room is a big deal, and Quinn will want all the details about what’s going on and Ridge’s breakup with Brooke.

Meanwhile, on Monday’s new episode of B&B, it will be a big day for Liam Spencer (Scott Clifton), who will show up for his first day back to work with his father at Spencer Publications. As B&B viewers know, Bill Spencer (Don Diamont) recently asked Liam to come back to Spencer and reclaim his birthright. Liam readily accepted, which was a big deal considering everything that he and Bill have been through in recent times.

As B&B viewers will remember, Bill and Liam had been estranged until recently. Back when Liam was married to Steffy Forrester (Jacqueline MacInnes Wood), Bill and Steffy had an affair, which Liam later found out about when Steffy had a not-so-secret paternity test done. Liam promptly left Steffy, and then Bill decided to actively pursue Steffy, who wanted nothing to do with him.

Bold and the Beautiful Recap Wednesday November 27: Delusional Thomas Thinks He And Hope Are Getting Back Together, Ridge Romances Shauna @celebratesoaps https://t.co/ljzD92URzd

Bold And The Beautiful Spoilers: Lia Spencer Will Get Back Together With Hope Logan

That ended up making Liam get back together with Hope Logan (Annika Noelle) – something that Bill helped orchestrate with a lot of deceit and manipulation. It was a big ordeal, and there was bad blood between Bill and Liam for about a year. But the two managed to put their differences behind them, and they’ve developed a decent father/son relationship that they continue to build upon.

On Monday’s episode, Liam will return to Spencer. He’ll be welcomed by Bill, Wyatt Spencer (Darin Brooks), Justin Barber (Aaron D. Spears), and Billy’s city hall connection Emmy (Sheryl Underwood) in a special gathering. There should be some touching family moments here, and B&B spoilers indicate that Bill will even show a softer side of himself for the gathering.