The Young and the Restless Spoilers: Thursday, November 28- Cane Promises To Find The Money Colin Has Hidden- Adam Asks Chelsea To Move In 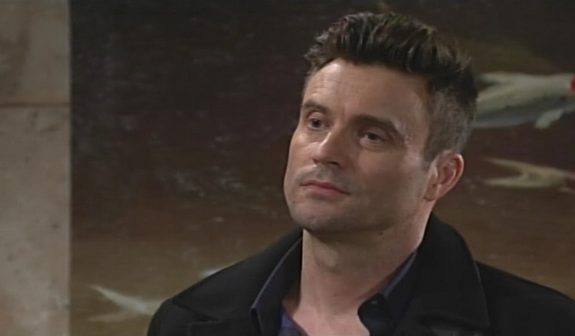 The Young and the Restless spoilers for Thursday, November 28, tease that that action’s really heating up. But before we get into that, we have a quick programming note. Y&R will be airing new episodes over the Thanksgiving holiday, on both Thursday, November 28th and Friday, November 29th, so stay tuned so you don’t miss a thing!

On Thursday, Devon Hamilton (Bryton James) and Elena Dawson (Brytni Sarpy) will chat with Chance Chancellor (Donny Boaz), Amanda Sinclair (Mishael Morgan), and Cane Ashby (Daniel Goddard) at Devon’s penthouse. It will seem that the police have done everything they can do, and that Colin Atkinson (Tristan Rogers) has been arrested after Simon Black (Jeffrey Vincent Parise) flipped on him.

The bad news will be that Colin has hidden the money that Devon gave to Cane. Chance will end up leaving after the update, and Devon will basically accuse Cane of being in cahoots with his father. Cane will swear that he’s innocent and would never disrespect Katherine Chancellor (Jeanne Cooper). Devon won’t believe him, but Elena will give him the benefit of the doubt.

The Young and the Restless Spoilers: The Newmans Get An Unexpected Surprise For Christmas

Young And And The Restless Spoilers: Cane Ashby Vows To Find The Money

Devon will then turn on Amanda, accusing her of working together with Cane, but Amanda will deny it. Elena and Amanda will spar, with both getting digs in against the other. Cane will ultimately say that blaming each other isn’t the solution here, and that in the spirit of the holiday, he’ll track down the money and give it to the person Katherine intended it for.

Next on Y&R, Connor Newman (Judah Mackey) will have more trouble. He’ll tell Adam Newman (Mark Grossman) and Chelsea Lawson (Melissa Claire Egan) that the monster that was chasing him in his nightmare isn’t gone…he’s inside of him trying to eat him up. That will prompt Adam to call Sharon Newman (Sharon Case), who will later arrive and talk privately with Connor about the monster.

Meanwhile, at Jabot, Summer Newman (Hunter King) and Kyle Abbott (Michael Mealor) will observe as Theo Vanderway (Tyler Johnson) talks with his team and asks them to generate a custom emoji for Jabot. Summer will like the idea, but Kyle will wonder whether it’s really Theo’s idea at all. Later, Theo will share some more ideas with Summer, which she’ll like, but he’ll think she sounds surprised and will wonder if she and Kyle are doubting him.

Next on Y&R, at The Grand Phoenix, Phyllis Summers (Michelle Stafford) will tell Abby Newman (Melissa Ordway) that the guests who lost their jewels can’t even give a good description of the items. Turns out, the security system went down at the moment the jewels were stolen. Phyllis will think that the guests might have tampered with the camera.

The two women will argue, and Abby will offer to buy Phyllis out, but Phyllis will refuse. Chance will appear, and Phyllis will needle him about Las Vegas and Adam. Chelsea will arrive briefly before getting a text and needing to leave. Abby will then hear that another room was robbed, which Phyllis will soon learn. They’ll decide to call the police.

Next on Y&R, Adam and Chance will interact at Society. Chance will mention what happened in Las Vegas, but Adam won’t want to take about it…ever. Adam will then get a text and leave. And in the kitchen, Kyle will fill Lola Abbott (Sasha Calle) on what’s going on with Theo at Jabot. Lola will tell Kyle that if Theo’s not meant for the job, then it will become clear soon enough.

Young And The Restless Spoilers: Chelsea Newman Hears A Proposition

Next on Y&R, back at Adam’s penthouse, Sharon will share with Adam and Chelsea that Connor is suffering from PTSD, and that he could use therapy and even possibly medication to help with anxiety. Adam will then suggest that Chelsea move in to be closer to Connor – that he needs to come first.

Finally, on Thursday’s new episode of Y&R, Chance will return to The Grand Phoenix and Abby will tell him that there was another robbery from a room. Chance will then get a call from Colin, who will have escaped custody and is on the lam. He’ll say he has a plane to catch and hang up.