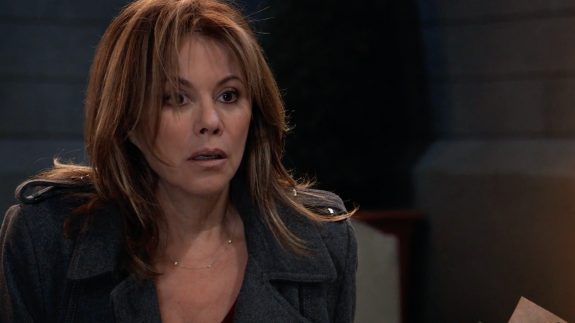 GH Spoilers: Sonny Corinthos Has To Face The Truth

Sonny Corinthos (Maurice Benard) and Mike Corbin (Max Gail) arrive. Mike is hungry. Sonny says he’s been working on turkey all day. Carly says the Metrocourt’s is never as good as Sonny’s. Mike wants to know what time his parents will be there. Carly tells Mike they can’t make it. Mike asks if Donna is Carly’s. Carly says the baby is Sonny’s too. Sonny wants everyone to enjoy the day. Carly points out that Mike seems confused. Mike and Sonny are watching football.

Sonny and Mike discuss how kids don’t need you when they get older. Mike asks Sonny about his relationship with his old man. Sonny says they had some hard times but it’s ok now. Michael Corinthos (Chad Duell) arrives with Wiley Cooper Jones (Theo and Erik Olson). Carly and Sonny turn toward the living room and see Mike holding Donna. Carly talks Mike into giving her the baby. Sonny and Mike agree and he breaks some dishes. Mike tells Carly to call Turning Woods because Mike isn’t safe there.

General Hospital Spoilers: Alexis Davis’ Is In Over Her Head

General Hospital’s Alexis Davis (Nancy Lee Grahn) is waiting to get discharged from the hospital. Alexis and Neil Byrne (Joe Flanigan) talk about her poisoning. Alexis doesn’t believe that Kendra Lennon (Michelle Argyris) poisoned her. Neil asks which of them she’s trying to convince. Kendra interrupts them. Kendra wants to know when Alexis wants to meet again. Alexis offers to order the supplement herself.

Kendra wants to know what Alexis is hiding from her. Alexis checks herself out of the hospital and follows Kendra to the cemetery. Alexis realized that Kiefer Bauer (Christian Alexander) was Kendra’s brother. Kendra knocks Alexis out at Kiefer’s grave. Neil can’t find Alexis and begins to worry. Julian Jerome (William DeVry) tells Neil he saw the same container at the dumpster when Kendra was in the alley. Julian says that was the day before the rats appeared.

General Hospital’s Andre Maddox (Anthony Montgomery) talks to Franco Baldwin (Roger Howarth) about the memory mapping procedure. Andre can do the procedure tomorrow. Finn reads Hayden’s letter. Anna answers the door for Andre. Andre is happy to see anna again. Anna asks Maxie and Peter to take care of Andre while she checks on Finn. Andre tells Peter about Franco’s decision to have the memory mapping reversed. Peter thought that Franco wasn’t interested in the procedure.

Franco changed his mind. Franco goes to the hospital to speak to Liz. Franco tells Liz he is having the procedure tomorrow. Franco hopes this is the last holiday Liz has to go through without her husband. Liz asks if Franco has plans for Thanksgiving. Franco is going to the Quartermaine’s. Liz says Monica Quartermaine (Leslie Charleston) deserves more time with him.

GH Spoilers: Lucas Jones Realizes He Made A Mistake

General Hospital’s Lucas Jones (Ryan Carnes) tells Liz Baldwin (Rebecca Herbst). That is made a mistake working Thanksgiving and is trying to find someone to cover for him. Meanwhile, Michael picks up Wiley to give Brad Cooper (Parry Shen) and Lucas time alone. Julian tampers with Brad’s car while everyone is away from it. Brad tells Michael he doesn’t feel well when asked about dinner. Michael believes it’s because of Nelle Benson (Chloe Lanier). Michael doesn’t want to fight about Nelle.

Michael says they need to bond together as a family for Wiley Cooper Jones (Theo and Erik Olson). Michael tells Brad that showing up for dinner would go a long way. Brad wants to be there when Lucas gets home. Michael and Wiley leave. Julian sits in his car and watches Michael leave with Wiley. Liz tells Lucas she’s arranged for him to take off from word. Someone will cover for Lucas. Julian looks for Lucas who has already left for home. Lucas arrives home and tells Brad he needs answers.